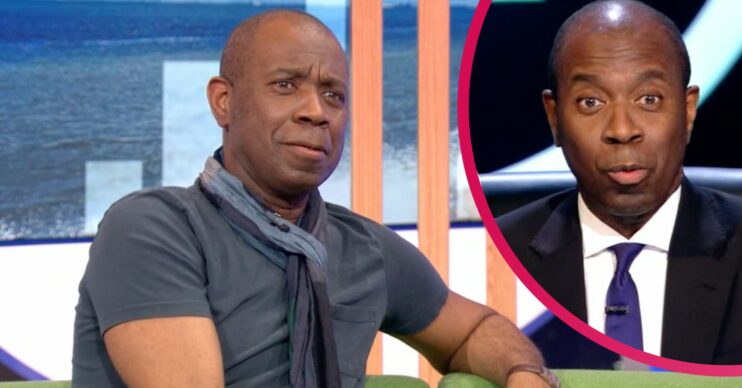 Mastermind star Clive Myrie looked worlds away from his usual formal dress code during an appearance on The One Show last night (Tuesday, February 1).

Rather than wearing the smart suits he’s known for, Clive instead opted for a more casual look, and viewers were loving it!

Why was Clive Myrie on The One Show last night?

Clive, 57, was on the show to talk about “life as a quiz show host”, as Jermaine put it.

“It’s a complete departure from the day job, but it’s so much fun,” Clive said of Mastermind.

Read more: John Bishop on the heartache of visiting his beloved father in prison when he was a lad

Clive’s “day job” is being a newsreader and journalist for the BBC, a corporation he’s worked for since 1987.

“I’m learning so much as well,” he continued as he spoke about Mastermind.

“Some of the specialist subjects are incredible!”

What else did Clive say?

Clive continued to speak very highly of both Mastermind, which he has been hosting since 2021, and the contestants.

“For them [the contestants], this is their Olympics,” he said. “This is their, you know, peak of quizzing.”

“It’s something that’s great to be part of,” he said. He then said that the best advice he’d received regarding Mastermind was to just “be yourself”.

“We hope it’s entertaining, it’s funny, and you see these celebrities in a different light as well, which I think is amazing,” Clive said.

Whilst many will have been interested in what Clive had to say about Celebrity Mastermind, it wasn’t what got some people talking online.

Plenty of The One Show’s viewers were instead talking about Clive’s outfit on the show. The 57-year-old had swapped out his smart suits for a more casual look. Clive donned a charcoal grey t-shirt and jeans and finished the look off with a blue scarf.

Viewers took to Twitter to compliment the star on his appearance.

“Love Clive Myrie but the casual look on The One Show reminds me of how shocked and uncomfortable you were when your teacher did dress down day,” a third wrote.

“Clive Myrie is just everything,” another said.

You can catch Clive hosting Celebrity Mastermind on Saturday, February 5 at 7.10pm on BBC One and BBC iPlayer.

Clive Myrie Mastermind The One Show