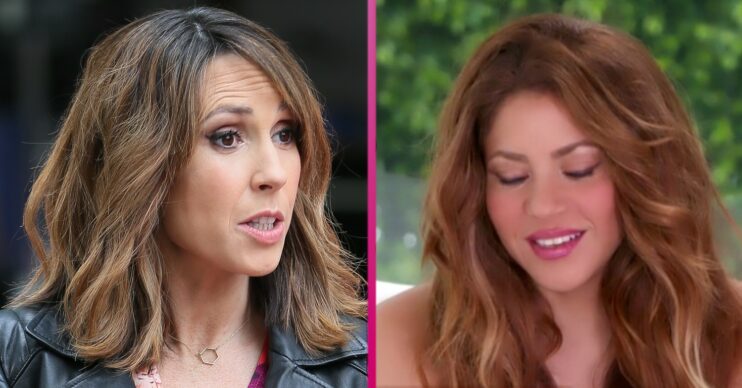 The One Show: Alex Jones responds to criticism over Shakira interview

Alex Jones explained on Twitter: "We have no choice"

The One Show viewers weren’t happy after Alex Jones and Ronan Keating ‘cut off’ guest Shakira last night after she suffered technical issues.

Disgruntled onlookers vented their unhappiness on social media as hosts Alex and Ronan were beset with technical difficulties.

Singer Shakira was scheduled to appear via video alongside producer Mark Ronson.

But issues with the feed meant she only appeared on screen for less than a minute at the The One Show‘s end.

Why was Shakira on The One Show?

The Colombian star, 44, was being interviewed as part of promotional efforts for her new single Don’t Wait Up.

However, right from the off, presenters Alex and Ronan struggled with speaking to her as Shakira’s image froze on screen.

About midway through the show, Alex pushed on to try and make the segment work, noting she thought Shakira could at least hear her.

But it wasn’t until the final moments of the programme that a working feed with the singer was established.

‘There’s only a minute left…’

However, time was against everyone as Alex tried to ensure Shakira got a few words in.

“Shakira can you hear us now? There’s only a minute left of the show,” Alex advised the star.

Alex continued: “But what does it feel like to be back?”

What did Alex Jones say?

Shakira only had seconds to reflect on her comeback – and her joy at being able to get back in the studio.

Alex soon interjected: “Shakira, I’m afraid we’re going to have to stop you there.”

I’m afraid we’re going to have to stop you there.

“It’s great to see you,” Alex added before signing off for the weekend.

Read more: Ant and Dec forced to apologise after ‘cameraman’ comment on The One Show

Shakira could be seen raising her hands in frustration – but also smiled to show she understood the situation.

Some viewers, however, were not as understanding about the pressures of live TV.

One enraged fan tweeted: “Sorry The One Show but cutting Shakira off like that was was incredibly rude and unprofessional.

“If you knew you had mere seconds left, you should have cut your losses instead of effectively blanking an international music star.

“I think a statement of apology is owed.”

Another fumed: “Omg this is so sad. They cut Shakira off she only spoke for about 45 seconds #TheOneShow.”

And a third person tweeted at Alex: “We understand technical difficulties, that’s fine, but we don’t appreciate the way Alex Jones
interrupted Shakira.

“You were very rude to her. There are better ways to do it. ‘Shakira, we’re going to have to stop you there!’ Come on Alex.”

Alex calmly and fairly responded: “We are a live show and they will just cut us off if we run over.

“We have no choice, but thanks for the input.”

– The One Show airs on BBC One, weeknights, from 7pm.

Alex Jones BBC BBC One Ronan Keating The One Show