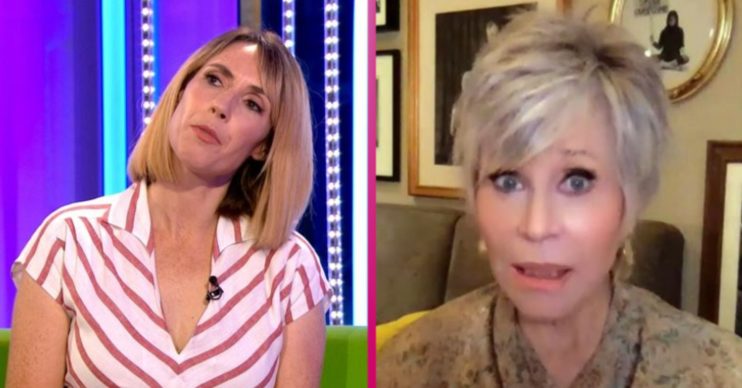 The One Show: Alex Jones makes ‘daft’ blunder in chat with Jane Fonda

Some watching thought it was a 'daft' mistake

Alex Jones left The One Show viewers unimpressed last night after she made a blunder during an interview with Hollywood legend Jane Fonda.

During yesterday (Wednesday, September 9) evening’s episode, the Welsh presenter and her co-host Gethin Jones welcomed the actress on for a chat.

Alex asked Jane is fans can expect a second series of Grace and Franke, her hit comedy series.

That’s despite the fact the show started in 2015 and has since spanned 78 episodes across six series.

The Welsh presenter said on the programme: “Your latest project, Grace and Frankie, has been incredibly popular over lockdown, loads of people have watched it. Can we expect a second series, Jane?

Jane looked confused for a moment before asking: “A second series?”

Jeez, do your research. Us fans are waiting for series seven.

Alex continued: “Well, a return series. A new season, as you say.”

Jane explained: “We have one more season. It will be, I think, 16 episodes long. In March, before we shut down because of the pandemic, we shot about four and a half episodes. So we’re going back in January to finish our final season.”

Reacting on Twitter, one fan of the BBC talk show said alongside an emoji of a monkey covering its eyes: “Alex asking if Grace and Frankie is coming back for a second season #theoneshow.”

Another wrote: “Jane’s face when Alex Jones asked her if there would be a SECOND series of Grace and Frankie.”

Someone else said: “#TheOneShow love it #JaneFonda is actually Grace. Apologies about the daft interviewer not knowing there’s been six seasons lol.”

A fifth said: “A ‘second series’ of Grace and Frankie? Jeez, do your research. Us fans are waiting for series seven.”

Another put: “If you manage to get #JaneFonda on #TheOneShow and then you ask her if there is going to be a second season of #GraceAndFrankie, when there has already been six, that’s pretty unprofessional. Alex Jones needs to do at least some basic research before talking to a Hollywood legend.”

Attention Grace and Frankie fans! @janefonda has some news for you! #TheOneShow pic.twitter.com/lnup7A0JGh