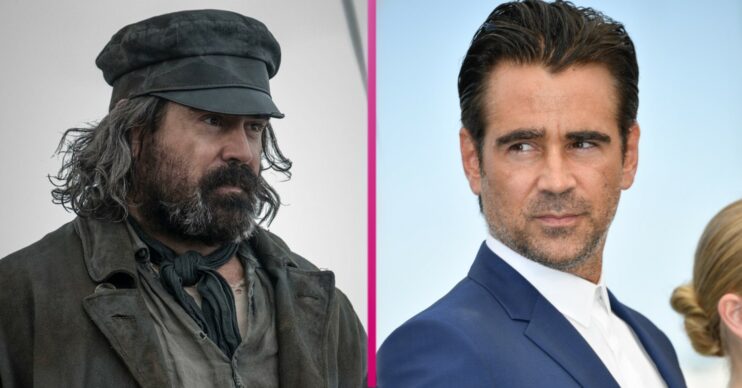 A remarkable turn-around for one of our favourite actors

The North Water marks the return of Irish actor Colin Farrell to our screens.

He was once known as one of Hollywood’s biggest hellraisers, now he’s clean and a doting dad. So how did he change his life around?

What is The North Water star Colin Farrell famous for?

Colin, 45, is one of the world’s most magnetic stars.

He first came to attention in cosy BBC One drama Ballykissangel in the late 1990s. But he soon made it to Hollywood and starred in a string of blockbusters.

But success in Hollywood also brought with it a descent into an alcohol and drug-fuelled lifestyle.

How bad did The North Water star Colin Farrell and his addiction issues get?

Colin appeared on Ireland’s The Late Late Show in 2013 and said: “I’m off the jar seven or eight years. I can tell by the last film I did when I got off it. It was interesting because I couldn’t remember a single frame of doing it.

“For years I could indulge in certain things. I had high tolerance for various drugs for years.

“I was sad. I was drinking loads.

“When I ever drink with my mates, we’d go to a pub on Wednesday night and have six pints, everyone would go home.

“I’d get a bag of powder, four joints and a bottle of Jack Daniel’s and drank until five in the morning.”

He also recounted the moment he hit rock bottom.

“I remember thinking one day that I’ll go to New York, buy €2,000 worth of smack and rent a bedsit, put black sacks on the window and shoot up until I die.

“The other choice was to change. I was clear about it. I chose the right one.”

Colin and his controversies

Alongside the booze and the drugs, controversy often followed.

After his stint in rehab, in 2006 a sex tape with ex-girlfriend Nicole Narain was leaked. This ended up as a legal matter.

He said on the Jonathan Ross show that he was “probably high” when he made it and that “it was probably a bad idea”.

Then, a year later, Colin took out a restraining order on a telephone sex worker who invaded the stage when he appeared on the Jay Leno chatshow.

During her invasion, she threw a self-published exposé of him on to Leno’s desk.

She had accused Colin of abusive messages, but failed a lie detector test on a TV show when asked to prove her claims.

How Colin has changed his lifestyle and his new focus

Colin did change his life when he booked into rehab in 2005.

In 2018 he reportedly checked back into a rehab facility as a preventative measure.

A source told the Daily Mail: “He decided to pre-emptavely check himself in before it went to a bad place. He didn’t want to go down that rabbit hole again.

“He’s so hyper aware that he’s an addict that he felt that he could very easily start using again.”

Now over 15 years sober, his focus now is his two sons – teenagers James and Henry.

“My kids are my masters,” he told Albawaba magazine.

“They bring up a lot of fear and self-judgement in me. Having kids is the most important thing in my life. This whole acting business is nothing in comparison.

“Fatherhood has changed me completely. It changes me every day. I don’t know what I’m doing most of the time – or all of the time – but I adore my boys. I love them very much.”