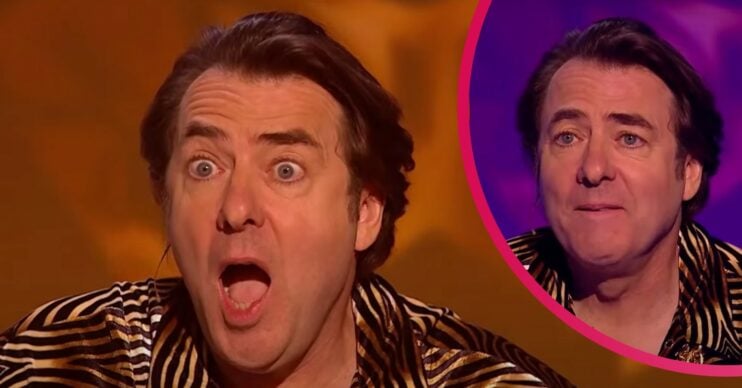 But did he 'upstage' his Masked Singer co-star?

Viewers of The Masked Singer roasted Jonathan Ross over his appearance on the ITV show last night (Saturday January 15).

Series judge and extravagant dresser Jonathan, 61, outdid himself with his latest outfit, which included lots of tiger stripes.

And while some watching at home were won over by Jonathan’s look, he was still brutally ridiculed on social media.

What was Jonathan Ross wearing on The Masked Singer?

His style saw him compared to Del Boy from Only Fools and Horses and Joe Exotic from Netflix’s Tiger King.

Read more: Jonathan Ross weight loss: The Masked Singer star reveals how he lost a stone in a MONTH

But while many observers were amused by Jonathan’s typically bold get up, others seemed appalled.

Many viewers made jokes on social media about there ‘already being enough over-the-top costumes’ on the show.

But others tweeted how Jonathan’s striking ensemble left them feeling unwell.

“I don’t know if he’s trying to be funny but it’s just making me nauseous #TheMaskedSinger,” one person wrote.

Another person asked incredulously: “Wtf is @wossy wearing on #TheMaskedSinger? 1970s disco throwback shirt… and don’t get me started on the goddamn trousers! I can’t ever unsee that now. Thanks @ITV.”

And someone else teased: “@wossy Tom Jones called… He wants his trousers back #MaskedSinger.”

Another puzzled viewer asked: “Forget who Poodle is, I just want to know what the hell Jonathan Ross is wearing? #MaskedSinger.”

Others were even more direct with their criticism.

“Most stupid #MaskedSinger costume of the night goes to Jonathan Ross,” one person claimed.

Another wrote: “What on earth is Jonathan Ross wearing he looks a [blank] #MaskedSinger.”

Forget who Poodle is, I just want to know what the hell Jonathan Ross is wearing?

However, among all the hate, there was some appreciation for Jonathan’s fashion choices.

And another contributed: “Don’t know what Jonathan has on, but I love it! #MaskedSinger.”

‘I thought my outfit was pretty extra’

That’s because Joel, 36, wasn’t exactly dressed in a particularly understated manner himself.

He shared images comparing his and Jonathan’s loud looks on Instagram and Instagram Stories on Saturday evening.

“I thought my outfit was pretty extra and then I saw Jonathan’s,” Joel chuckled in his caption.

The Masked Singer continues on ITV, Saturday January 22, at 7pm.