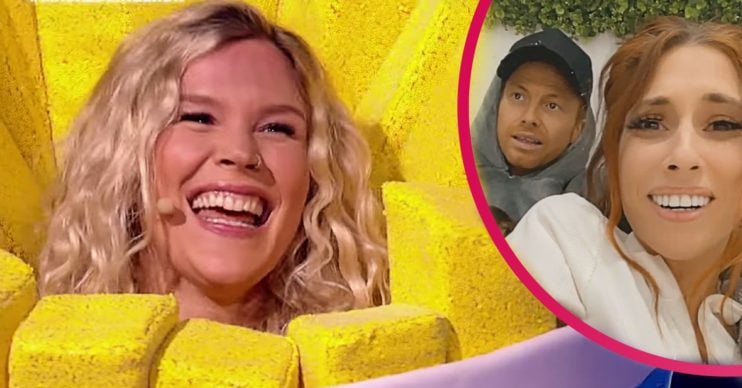 Sausage won The Masked Singer last night (Saturday February 13) after Joss Stone was revealed to be behind the character.

While the unmasking and series win stunned many at home, one of Joss’ first jobs was to demand Joe Swash apologise to fiancé Stacey Solomon, after he became convinced she was actually under the mask.

And because of this, he didn’t speak to her.

Why did Joe have a go at Stacey because of Sausage on The Masked Singer?

Throughout Saturday, 39-year-old Joe badgered Stacey about The Masked Singer and told her that he would get the “hump” if she turned out to be Sausage.

And he carried on, with Stacey documenting everything on her Instagram Stories.

He joked that their “relationship would never be the same again” if Stacey turned out to be the character.

However, he breathed a sigh of relief when Sausage took off her mask.

He said: “For a moment I thought it was you, you know?”

What did Joss say in her message?

Aware that Joe had been giving Stacey a hard time over The Masked Singer, Joss , 33, took to her own Instagram Stories to demand Joe apologise to Stacey.

Cradling her new daughter Violet, she told Joe: “I wanted to make a quick message for Joe… What’s his last name? Joe Swash.

I believe you have some apologising to do to Stacey, so get to it. Get those flowers!

“I believe you have some apologising to do to Stacey, so get to it. Get those flowers!”

In return, Stacey called her a “legend” and “amazing”, and then promptly told Joe: “You’d better have the bouquet ready tomorrow.”

Wow @JossStone I would have never guessed that. Well done! #TheMaskedSinger

Absolutely shocked that sausage was @JossStone .. I was convinced it was @Sheridansmith1 😱#TheMaskedSinger

#TheMaskedSinger OMG!! I stunned!! That was amazeballs!

I’m stunned that Joss Stone turned out to be sausage. Which is not a sentence I ever thought I’d write…
What a thoroughly bonkers series!
Loved it. #TheMaskedSinger https://t.co/a17I9bcF9o

It wasn’t just Joe who was in a flap over Sausage’s identity, it was the viewers, too.

Many were convinced that Sheridan Smith was under the mask, and took to Twitter to register their shock.

“Wow @JossStone I would never guessed that. Well done!” one wrote.

Another said: “I’m stunned that Joss Stone turned out to be Sausage.

“Which is not a sentence I ever thought I’d write… What a thoroughly bonkers series! Loved it. #TheMaskedSinger.”