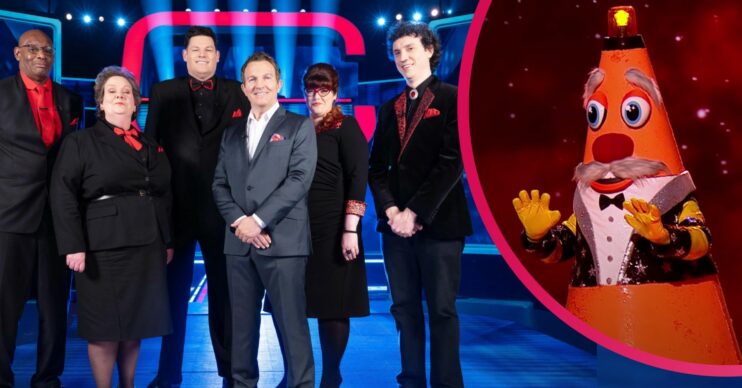 The Masked Singer: Could Traffic Cone be a star from The Chase? Bookies appear to think so

Would you put money on it being this telly fave in the costume?

The Masked Singer fans are desperate to know just who’s who underneath each of the masks – and it seems the bookies might already have an inkling who is in the Traffic Cone costume.

The identities of the celebrities performing as Robobunny, Mushroom, Rockhopper and Panda are also all yet to be revealed.

But one of the bookies’ tips to be Traffic Cone could end up as the biggest surprise of the entire series if proved correct.

And that’s because one of the most popular male stars on British TV is among those priced up.

Who is Traffic Cone on The Masked Singer?

According to Ladbrokes, there are several familiar faces in contention to be unmasked as Traffic Cone.

And included among them is a star from ITV’s The Chase.

Read more: Who left The Masked Singer? Fans all make same complaint as Firework is unmasked

However, the bookies do indicate Traffic Cone is probably a man, so fans can rule out Anne Hegerty or Jenny Ryan as possibles.

So that seems to leave their colleagues Mark Labbett, Shaun Wallace, Paul Sinha and Darragh Ennis singled out… but it is actually host Bradley Walsh who the oddsmakers have considered.

Who else is contention according to the bookies?

Bradley, however, is apparently an outside bet with Ladbrokes.

They consider Welsh crooner Aled Jones as most likely to be revealed as Traffic Cone with odds of 5/4.

Who do The Masked Singer viewers reckon could be performing as Traffic Cone?

Bradley is definitely a popular choice among viewers’ guesses on social media – but so are the others on the bookies’ shortlist.

Another pondered: “Traffic Cone sounds like Bradley Walsh talking but then Alexander Armstrong when singing #TheMaskedSingerUK.”

And someone who isn’t even a regular watcher tweeted: “Don’t watch The Masked Singer but every time it is on I’ve got ‘Traffic Cone, Aled Jones, Bradley Walsh and Micheal Owen’ all over my Twitter feed.”

The Masked Singer next airs on ITV on Saturday February 5 at 7pm.