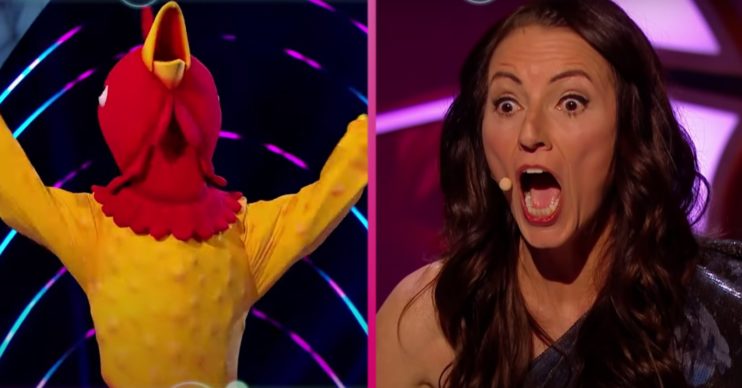 But did you guess correctly?

Eddie ‘the Eagle’ Edwards was revealed to be the famous face in the silly costume, shocking the judges’ panel.

But many fans were puzzled because they were absolutely convinced that it was a different celebrity doing the birdie dance.

Who was Rubber Chicken on Masked Dancer UK?

Eddie ‘the Eagle’ Edwards is best known for his 1988 Olympics ski-jumping antics.

The 57-year-old was the subject of a 2015 biopic in which he was played by Taron Egerton.

Read more: The Masked Dancer 2021: Is Llama a Line of Duty star?

He also won the first series of reality diving show Splash! in 2013 and has subsequently acquired a law degree.

The judges were kicking themselves over not realising who was the disguised dancer. But they – especially Strictly dancer Oti Mabuse – were pretty impressed with his moves.

Many of those watching at home were less impressed. But that may be due to their guesses about Rubber Chicken’s identity being so wide of the mark. Others, however, enjoyed the huge surprise. Nonetheless, vast swathes of social media were dead certain that Bradley Walsh was involved.

“OMG another shock! I would never have guessed Eddie the Eagle at all #maskeddanceruk,” admitted one viewer.

I am beyond surprised.

Another tweeted: “Eddie the Eagle! I am beyond surprised #MaskedDancerUK.”

And a third wrote: “The way my jaw hit the floor when Eddie the Eagle was revealed as Rubber Chicken… I was certain it was Bradley Walsh. Best unmasking by far #MaskedDancer.”

Other fans were even more staggered – and a little disappointed – to have expectations defied. Furthermore, one clue about “My chick is a purple dinosaur” – which could have referred to Bradley’s son Barney – had viewers particularly confused.

“Blown away by the Rubber Chicken being Eddie the Eagle. Thought it was Bradley Walsh,” another Twitter user chimed in.

And yet another contributed: “Aww I so wanted Rubber Chicken to be Bradley Walsh. God knows why.”

When Rubber Chicken is unmasked as Eddie “The Eagle” Edwards and not Bradley Walsh… #MaskedDancerUK pic.twitter.com/L2k0X41e0m

Increasingly singled out as a potential winner of the whole series, Take That stars Howard Donald AND Jason Orange seem to be the first names on viewers’ tweets. Matt Willis is also said to be in the running. Meanwhile, Harry Judd and Danny Jones are relatively new picks.

Emma Willis and Carol Vorderman have been identified as possible dancing amphibians. Add new name Lisa Snowdown to that list. That’s because, apparently, her surname is the name of the tallest mountain in Wales and a clue suggested Frog’s career had “peaked in Wales”.

Maisie Smith and Emily Atack have been linked with being Squirrel. But Cheryl’s name is the latest in the frame – and odds of her being under the mask have been slashed to 6/4.

Who do you think are under the masks?

The Masked Dancer returns to ITV on Thursday June 3 at 7.30pm.