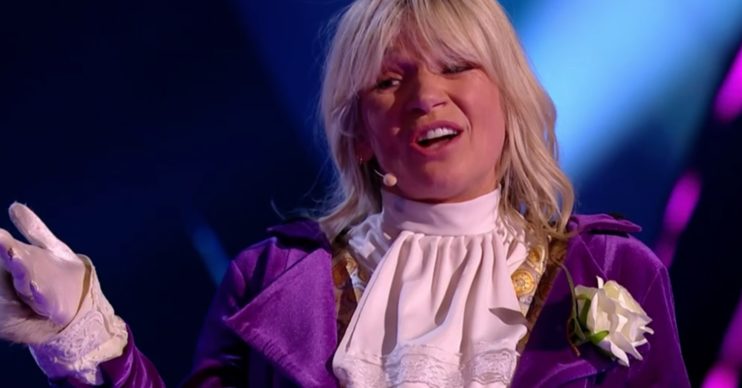 Zoe Ball has confessed she was told off by The Masked Dancer UK 2021 bosses.

The Strictly star became the sixth celebrity to be eliminated from the ITV competition.

None of the judges guessed it was her, aside from David Walliams who twigged it last-minute.

During an appearance on This Morning, Zoe opened up about her time on The Masked Dancer.

As she revealed some of the details, she explained how producers are very strict behind the scenes.

“You’re balaclava-ed up and you’ve got a visor on – you’re basically like a ninja – and then you’re in the costume,” she said.

“I tried to have a conversation with Scarecrow when we were all standing on the stage.”

However, before they could engage in conversation, Zoe says she was told to “Back off!”

She went on to admit that the hardest part was not speaking to anyone.

“The whole thing is bonkers – I loved being Llama and trotting about. Not speaking was hard though,” the former It Takes Two presenter said.

“It’s still nerve-wracking – lots of heavy breathing and sweating but ultimately an absolute hoot. I definitely wouldn’t be as brave without my Llama disguise. The outfit gives you a superpower.”

What are the latest Masked Dancer UK 2021 viewer theories?

Viewers are convinced that one of the remaining characters, Zip, is reclusive comedian Peter Kay.

This week, each character was asked to reveal a word that gave some kind of clue as to their true identity.

Zip said the word “Geraldine”, and now fans are convinced that it was reference to Peter’s TV character, Geraldine McQueen.

Meanwhile, other fans also have a theory that Frog is former pop star Kelly Osbourne.

With clues like a jack in a box and writing the word “Ozzy” instead of Australia it’s hard not to assume it’s Kelly.

As a result, one convinced viewer said on Twitter: “Frog is Kelly Osbourne. Ozzy on the map!”