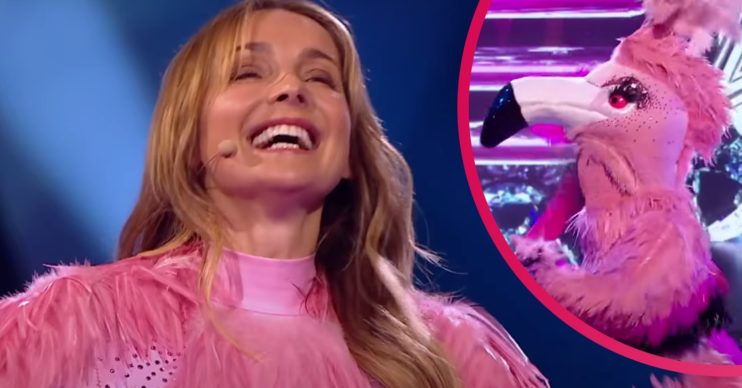 The Masked Dancer: Louise Redknapp revealed as Flamingo, as fans share theories on other contestants

Are these the dancing celebs under the masks?

The Masked Dancer saw Louise Redknapp revealed as Flamingo last night (Sunday May 30) – and social media is awash with theories about who else is under a mask!

Singer Louise was identified correctly by Jonathan Ross on the panel before her unmasking. But despite her early exit from the ITV competition, Louise clearly loved being in the pink for The Masked Dancer.

She explained after the show: “I love to dance. And after such a tough year of lockdown I thought: ‘I just need to get out of the house!'”

Louise surprises her own family with Flamingo reveal!

I just needed to get out of the house!

The former Eternal star then shared a clip of 12-year-old Beau’s disbelief with her social media followers. However, she did have to give Beau a nudge to look up. That’s because, in the moment, he seemed more engrossed in his phone.

“I don’t think Beau was expecting to see me then,” Louise laughed on Twitter.

She went on explain: “He was more interested in TikTok!”

Fans had a ball speculating which celebs are involved following the first episode which saw Viper (Jordan Banjo) depart.

But who could be under the masks as Beagle, Carwash, Frog, Rubber Chicken, and Squirrel?

Beagle mentioned about receiving a “first pair of boots” and also that he had flown planes before.

For some on social media, this seemed to indicate that Alexander Armstrong could be the mystery boogier. But others reckoned that Ray Quinn might be under the mask.

Here are some clues given about Carwash’s identity that may or may not be relevant. A red Ferrari, a ‘busted’ car wash sign, they’re ready to ‘pop bubbles’, they like to perform and they’re ready to ‘let it shine’.

Could it be Busted’s Matt Willis? Or Take That’s Jason Orange? Or maybe car lover Jay Kay from Jamiroquai?

Several clues were given about Frog, including that they are someone who has ‘tales to tell’. A Hollywood film contract, a diary room reference and making a ‘big splash’ were also mentioned. As were an American accent and the colours red, blue and yellow.

Carol Vorderman was a top pick with the judges due to Frog’s figure. And the sight of fields in Frog’s hype video had some wondering whether field-frolicker Theresa May could be involved.

Who is Rubber Chicken?

Strictly winner Bill Bailey is a popular pick to be unveiled as Rubber Chicken, because rubber chickens love to dance. Comedy fave Bob Mortimer was also mentioned due to a rubber chicken being a comedian’s punchline. And the sight of dogs in the hype video has meant others reckon Paul O’Grady could be in the running.

Other clues relating to Rubber Chicken include: always being chased, a slapstick comedy song and the playing of a piano.

Squirrel performed along to Taylor Swift hit Shake It Off. Viewers were also told they’ve got “street cred”, impersonate people and were ‘TV royalty from an early age’.

Celebs identified on Twitter as being potential Squirrel candidates include: Maisie Smith and Emily Atack.