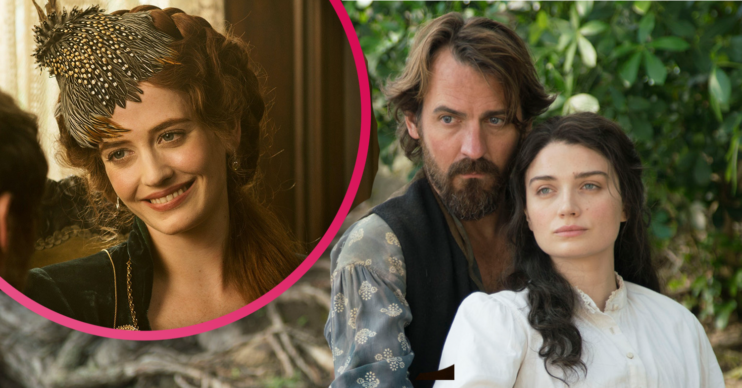 The BBC series is based on Eleanor Catton's book

Following its premiere last Sunday (June 21), viewers have already fallen in love with the show and its incredible cast.

One fan tweeted: “The Luminaries was a marvel to watch – loved seeing a local novel get the Peak TV treatment.”

Another added: “All hail the Luminaries it’s goanna be so good!!”

Set in the wild West of New Zealand’s South Island at the peak of the 1860s gold rush, The Luminaries is a period murder mystery.

It follows the journey of Anna Wetherell, who arrives in New Zealand from London to start a new life for herself.

Anna bravely makes the exhausting voyage on her own.

She’s then taken completely by surprise when she meets love interest Emery Staines.

Instantly, the pair are smitten with each other and arrange to go out for dinner upon their arrival.

But after arriving in New Zealand, Anna meets Lydia Wells – and she has other ideas.

The scheming fortune-teller realises Anna is vulnerable, making her a perfect fit to work in her saloon.

Knowing she never would take such a job if Emery were in the picture, Lydia devises a wicked plan that leaves Anna deceived, swindled and betrayed.

A few more twists and turns sees poor Anna trapped in a tangled web of blackmail, fraud and false identity.

She’s then finds herself accused framed for murder.

Emery can prove her innocence but when he mysteriously vanishes, she’s left fighting for her life.

Will she make it out alive? And who is the real killer?

What are The Luminaries?

The term luminaries is used in astrology to describe two astrological planets, stars or natural satellites that are the brightest and most significant objects in the skies.

For example, the sun and moon are often referred to as luminaries as they both illuminate things.

Astrology is a predominant theme in Catton’s book, which is based on real astrological charts of the time.

In the title, she assigns the 12 signs of the zodiac to her 12 key characters, and 12 key venues to the 12 houses of the astrological chart.

Although the BBC drama is very different to the book, the astrology theme is maintained in the series.

In episode one, we learn that Anna and Emery are “astro twins”.

Lydia explains:  “If two people were to be born at the exact same instant very near to one another, they will become known what’s known as asteroid twins.

Is The Luminaries based on a book?

The BBC drama is based on Eleanor Catton’s best-selling novel of the same title.

However, the televised series is extremely different to the book.

“It reinvents the novel so thoroughly, turning the story inside out and back to front, beginning near the end of the book,” Eleanor revealed.

“The narrative is split  into two different timelines, following characters who in the novel are important but largely obscured.”

Eleanor spent five years writing the novel and then another seven adapting it for television.

Having watched the drama back, Eleanor revealed that fans of the book are in for a whole new journey thanks to the huge changes made for TV.

She added: “The story no longer feels as though it belongs to me alone.

“I’ve lived with these characters and this world for all my adult life, and it’s a great feeling, now, to see the story all grown up and leaving home.”

Who is in the cast of The Luminaries?

Eve Hewson takes on the lead role of Anna.

If she looks familiar, that may be because she is the 28-year-old daughter of U2 legend Bono.

The rising star previously played nurse Lucy Elkins in The Knick and Anne Morgan in Tesla.

Speaking ahead of The Luminaries premiere, she said: “I hope that [people] enjoy it. I hope that they fall in love with the characters, get invested in the story and they want to take the journey with us and that they keep watching.

“I’m confident they will because the writing is so brilliant and it looks really beautiful. I’m really proud of it.”

Penny Dreadful star Eva revealed her hopes for the series shortly before the premiere.

She said: “I truly hope that the audience will be swept away by this epic adventure and that they are going to really feel as if they are living in the 1860s.

“They are going to identify with those characters and live this wild adventure.”