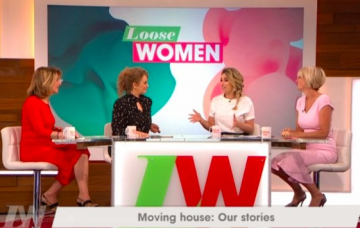 The Loose Women bid a bizarre farewell to ITV studios

Some viewers wondered what was going on!

Numerous ITV shows bid farewell to their old London Studios today but none did it quite like the Loose Women!

At the end of the programme, Kaye Adams, Nadia Sawalha and Jane Moore were led in a sing song of the Spice Girl’s Goodbye by fellow panellist Stacey Solomon.

As the former X Factor star belted out the track as she swayed with her co-stars and guest Martin Kemp, they were then treated to a surprise appearance!

The comedian joined the line-up for the final chorus as the Loose Women encouraged their seemingly reluctant crew to also join them on stage.

Stacey couldn’t help laughing through her singing at the sight of Johnny dressed up as Geri Horner and viewers also found it hilarious.

“@JohnnyVegasReal is a treat for the eyes!!! #LooseWomen,” wrote one. “What have I just watched?” asked another with numerous laughing face emojis.

Others were a bit confused about what was going on and why there was such a fuss about moving studios.

Like other ITV shows including This Morning, Lorraine and Good Morning Britain, Loose Women are moving to new studios in a different part of London for the next five years.

During that time, the current facilities on London’s South Bank will be completely revamped and refurbished.

The Loose Women said it was a sad farewell as they have been in the studio since the show first launched in 1999 – when Stacey revealed she was still only 10-years-old!

The stars created a time capsule which they intend to open again in five years time when they return to see how times may have changed.

Despite the relocation, the show will broadcast as normal on Monday morning from 12.30.

What did you make of the Loose Women farewell to the London studios? Leave us a comment on our Facebook page @EntertainmentDailyFix and let us know what you think!