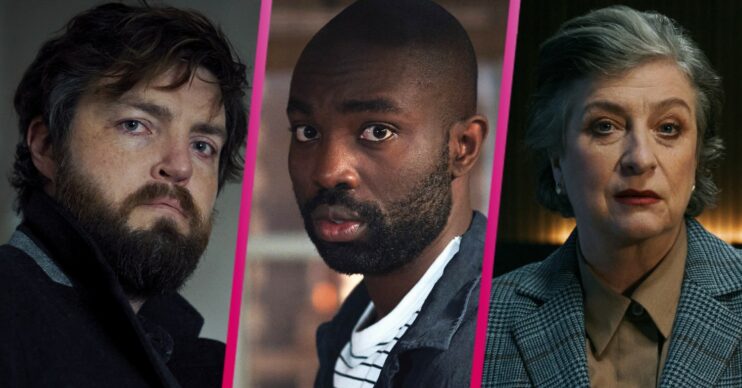 The Lazarus Project on Sky: Who’s in the cast opposite lead actor Paapa Essiedu?

Here's how you recognise everyone from The Lazarus Project...

The Lazarus Project on Sky and Now TV is a new sci-fi series which has been getting some great reviews – but who’s in the cast?

This thriller is about a top-secret organisation dedicated to preventing mass extinction.

The organisation has the ability to manipulate time and make it go backwards.

The show centres around the main character, George, who begins to re-live time after witnessing the world end.

He is recruited into the organisation but goes rogue in a bid to save the woman he loves.

Who is in the cast of the Lazarus Project: Paapa Essiedu is George

The Lazarus Project has a lot of recognisable faces in the cast.

Paapa Essiedu plays the main character of the show George.

He’s been initiated into The Lazarus Project after gaining the ability to go back in time.

You’ll probably recognise Paapa Essiedu, 32, as Kwame in the BBC’s big hit I May Destroy You.

He earned Emmy and BAFTA nominations for his role in the hit drama.

He’s been on our screens since 2013, when he first appeared on TV as Roy in the brilliant Utopia.

So he’s already getting a reputation for appearing in some of the best dramas of recent times.

His other TV credits include the Anne Boleyn miniseries where he played George Boleyn and his role as Alexander in Gangs of London.

He’ll reprise his role of Alexander Dumani in Gangs of London series 2.

Anjli Mohindra plays Archie in the cast of The Lazarus Project.

Archie is one of George’s fellow agents at the Project.

She’s an ex-MI5 agent, and the one who first initiates George to the project.

Her first ever TV role was as Shareen in two episodes of Coronation Street in 2005 and 2006.

Since then she’s featured in series like Cucumber, Paranoid and Beaver Falls.

She’s also known for her role as Queen Skithra in Doctor Who, Nadia in Bodyguard, and Zaheera Kamara in Bancroft.

Actor Rudi Dharmalingam plays another one of George’s colleagues in the top-secret time travelling agency.

Another “mutant” as the fellow agents have named George, he also has randomly received the ability to time travel.

He’s known for playing James on The Split.

Fans of the series were devastated when his character was killed off in the third series.

He also portrayed Milan in BBC’s Our Girl, Jyotiranjan ‘Joe’ Clarke in Tin Star, and Dominic in Dark Money.

Hollyoaks viewers might recognise him as Tariq in the C4 soap.

Actress Caroline Quentin, 51, plays Wes in the cast of The Lazarus Project on Sky.

While the Lazarus Project seems to be shrouded in secrecy, Wes is in a leadership role over George and the other agents.

Actress Caroline is perhaps most famous for playing Dorothy in popular sitcom Men Behaving Badly from 1992 to 1997.

But she’s also had many other big roles in TV and film.

She was well-loved for playing Maddy Magellan in Jonathan Creek, and Kate Salinger in Kiss Me Kate.

Caroline is also known for her roles in Blue Murder, Life of Riley, and Life Begins.

Her more recent roles include playing Dawn in The Other One, Angela Sim in Doc Martin, and Mrs. Bumble in Dickensian.

Salóme Gunnarsdóttir stars in The Lazarus Project as Greta

Another agent at the Lazarus Project is Greta, played by Salóme Gunnardóttir.

One of the “chosen” agents of the Lazarus Project, Greta comes from the Danish armed forces.

The 30-year-old Icelandic actress has seen big roles in DC’s series Pennyworth as Patricia Wayne, and the History Channel’s Knightfall.

Lorn Macdonald stars as Blake in The Lazarus Project cast

Lorn Macdonald plays Blake in the cast of The Lazarus Project on Sky.

Blake is another agent who works alongside George in the agency.

Like the actor who plays him, the character is Scottish.

Blake has been scouted from the Royal Regiment of Scotland.

The 28-year-old Scottish actor graduated from the prestigious Royal Conservatoire of Scotland in 2015 and since then has seen some big roles.

You’ll probably recognise him as Albion Finch in Bridgerton, husband to one of the elder Featherington girls, Philippa.

He’s also known for his roles in Shetland and Deadwater Fell. 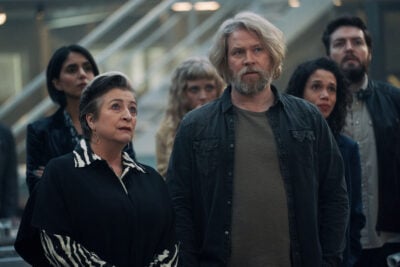 Lukas Loughran stars as the Dane

Actor Loughran is recognised for his roles in Netflix’s The Billion Dollar Code and DC’s Krypton.

He’s also had some roles in big films such as the Postcard Killings and Soundtrack.

Charly Clive plays Sarah in the cast of The Lazarus Project

George is driven by the loss of the love of his life to use his newfound time travelling abilities to save her.

The actress and writer, 27, is best known for her role in the TV short Britney, which she wrote and starred in.

Charly Clive is also known for her role as Marnie in HBO’s series Pure.

The writer and actress was diagnosed with a brain tumour in 2015, when she was just 23.

She write about her experience in a sellout comedy show called Britney.

Lia’s breakthrough performance came in 1991 when she starred in Theatre show The Revengers’ Comedies, for which she was nominated for an Olivier Award.

Over the course of the next two decades, she starred in numerous acclaimed productions including The Hothouse, The Homecoming and Skylight.

She received her second Oliver nomination for her role in Oresteia in 2015.

However, theatre isn’t the only place Lia has experienced success.

Lia has starred in a succession of big-name UK TV shows during her career.

These include the likes of Lewis, The Missing and His Dark Materials.

However, most people will probably know Lia from her starring role in Netflix drama The Crown.

The actress played Wallis, the Duchess of Windsor.

She recently played Grace Verdinikov in Death in Paradise, Dr. Emilie Mathieu in Riviera, Dr Cooper in His Dark Materials, and DSU Gemma Garland in The Capture.

The 41-year-old actress most recently starred opposite Stephen Graham in the tense drama Boiling Point.

She played calm Carly amongst the chaos of the restaurant.

Before that, TV fans will know her for portraying Mary Cratchit in A Christmas Carol, and Pilot Tyce in the film Star Wars: The Rise of Skywalker.

She played Rosa Parks in Doctor Who, Nicola Daniels in The A Word, and Rita in Close to the Enemy.

Other significant roles include Sgt Sally Donovan in Sherlock, Helen Hopewell in Waterloo Road, and Josie Porritt in Hope Springs.

Brian Gleeson guest stars in The Lazarus Project on Sky

Frank of Ireland fans will know him as Frank Marron in the C4 comedy.

Dublin-born Brian is famous for his role as Jimmy McCavern in Peaky Blinders.

TV viewers will also recognise him for his appearances in Rebellion, Resistance and The Bisexual, as well as the films Hellboy and Assassin’s Creed.

Brian, 34, is part of a famous acting family.

His brother Domhnall, who appeared with him in Frank of Ireland, is also a famous actor.

Last but not least, Tom Burke plays the series villain.

He plays rogue agent from the Lazarus Project named Rebrov.

The Kent actor also starred alongside Ryan Gosling in the film Only God Forgives and played Anthony in the critically aclaimed the Souvenir.

Of course, TV viewers will know him as Cormoran Strike in Strike.

He’s also played Dazzle Jennings in The Crown, Athos in The Musketeers and Fedya Dolokhov in War & Peace.

The Lazarus Project is available to watch on Sky TV and NOW.

Are you watching The Lazarus Project on Sky? Leave us a comment on our Facebook page @EntertainmentDailyFix and let us know what you think of this story.