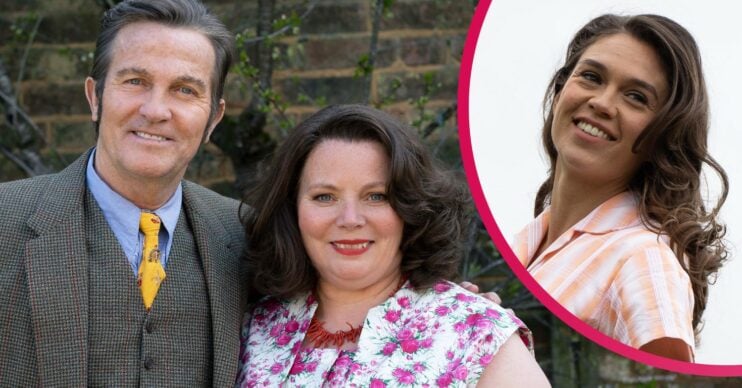 Pop Larkin and Ma Larkin return to ITV1 for the first time in nearly 30 years, but what is The Larkins about?

Is it different to The Darling Buds of May, and how many episodes is it?

Here’s everything you need to know about the new Sunday night family drama.

What is The Larkins about?

The Larkins on ITV1 follows the warm-hearted, wheeler-dealing adventures of the iconic Larkin family in the idyllic Kent countryside.

We meet good-hearted Pop Larkin, his wife Ma and their six children who make up a working-class family in the late 1950s.

In the Kentish countryside, considered the Garden of England, the family has achieved a small patch of paradise on their farm.

But their good heartedness isn’t always shared by other, sometimes snobbish members of their idyllic community.

In addition to their clashes with authority and snooty villagers, The Larkins will feature a love story between daughter Mariette and Cedric ‘Charley’ Charlton.

A newcomer, Charley arrives as an unworldly, officious accountant there to investigate the Larkins’ taxes.

However, Mariette soon distracts him and he falls in love with her.

But there’s a romantic rival in the village, in the form of Tom Fisher, a handsome and mysterious figure…

The Larkins on ITV1 will be a six-part drama series.

Although we have been told that there will be a Christmas special of the show.

Where is it filmed?

The Larkins on ITV1 is filmed in the idyllic Kent countryside.

Talking to journalists at a press launch for The Larkins, Bradley said: “It’s a proper working farm [in Kent].

He added: “And I nearly got crushed by a pig by the way, thanks to director Andy De Emmony.

“He made me get in the pig pen with Betty the pig.”

The actor also revealed his hayfever does become a problem filming on a farm!

Who stars in the cast of The Larkins on ITV1?

Relative newcomer Sabrina Bartlett takes on the role of Mariette.

Viewers know Sabrina best for her roles in Bridgerton (where she plays Sienna Rosso), Poldark and Knightfall.

Upon taking the role made famous by Catherine Zeta-Jones, Sabrina said: “I am really REALLY excited to be taking on the role of Mariette Larkin in this new adaption of H.E. Bates novels.

“I can’t wait to bring these heart-warming stories to life alongside such a wonderful team.

“It’s just the perfect dose of escapism we all need right now.”

Is The Larkins on ITV1 based on a book?

The Larkins is a new adaptation of the classic novel The Darling Buds of May by H.E. Bates.

Screenwriter Simon Nye (The Durrells, Men Behaving Badly) penned the drama, while Abigail Wilson (Trollied, Stella) is on board to write one of the episodes.

Simon said: “The novels are short, hilarious and magical.

“We will be expanding the Larkins’ world a little and can’t wait to immerse ourselves in this glorious countryside idyll.”

The book and its sequels were last adapted 30 years ago as The Darling Buds of May.

Set in the late 1950s, The Larkins is the story of a working-class family led by the golden-hearted wheeler dealer Pop Larkin and his wife Ma, together with their six children.

The Larkins on ITV1 – is it the same as The Darling Buds of May?

Both series are based on the H.E. Bates books and focus on the lives of the Larkin family.

Of course, Catherine Zeta Jones’ role as Mariette catapulted her to fame in America.

The Larkins on ITV1 is a new reboot of the heartwarming drama, with a new cast and no doubt a brand new fanbase, too.

Are you excited about watching The Larkins on ITV1? Leave us a comment on our Facebook page @EntertainmentDailyFix.