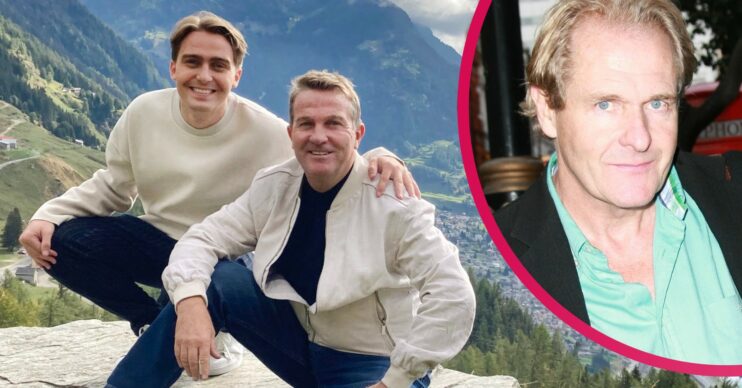 Actors will join Bradley Walsh, who plays Pop, and Joanna Scanlan as Ma

Popular TV actors Peter Davison and Robert Bathurst have joined the cast of The Larkins, ITV has revealed.

ITV’s new TV adaption of H.E. Bates’ novel The Darling Buds of May will star Bradley Walsh as Pop and Joanna Scanlan as Ma.

So who else is in the cast – there’s some more VERY exciting news – and and when will it start?

Read more: Bradley Walsh drama The Larkins: When does the ITV drama air?

The Larkins cast: who stars in the ITV1 series?

Last year, ED! told you that ITV1 would be retelling the story of Pop and Ma Larkin, previously portrayed by David Jason and Pam Ferris in The Darling Buds of May.

In the new adaptation, Bradley Walsh will portray Pop Larkin, while Joanna Scanlan will play his wife Ma.

Viewers of the original – or fans of the book – will know that the fun-loving working class couple raise their six children in the late 1950s in the Kentish countryside.

ITV1 has now revealed that Peter Davison will be joining the cast as the Vicar.

He’s also appeared as Tristan Farnon in All Creatures Great and Small, David Braithwaite in At Home with the Braithwaites and DC Dangerous Davies in The Last Detective.

Is Barney Walsh in the cast of The Larkins?

Fans of Bradley Walsh and Son: Breaking Dad will be thrilled to hear that Barney Walsh will also appear in the series.

The Larkins on ITV1 – what’s it about?

The series is a new adaptation of H.E. Bates’ novel The Darling Buds of May.

The book and its sequels were last adapted 30 years ago as The Darling Buds of May.

Set in the late 1950s, it’s the story of a working-class family led by the golden-hearted wheeler dealer Pop Larkin and his wife Ma, together with their six children.

Who plays Mariette and Charley?

Alongside their weekly battles with authority and snobbish villagers, The Larkins will follow the love story between Mariette and village newcomer Cedric ‘Charley’ Charlton (Sabrina Bartlett and Tok Stephen).

Charley arrives in the village as an unworldly and officious accountant from the city, there to investigate the Larkins’ tax affairs.

He is soon distracted by the beautiful Mariette, with whom he falls head over heels in love…

Screenwriter Simon Nye – of Finding Alice and The Durrells fame – has written the new episodes “with the aim of capturing the warmth, optimism and escapism of The Larkin family for a modern generation”.

Abigail Wilson (Trollied, Stella) also writes one of the episodes.

The new ITV1 series will be a six-part television drama series.

Each episode is expected to be one hour long.

ITV has yet to confirm a start date.

Although we know filming is due to start any day soon.

Are you looking forward to the new ITV1 series The Larkins? Leave us a comment on our Facebook page @EntertainmentDailyFix.