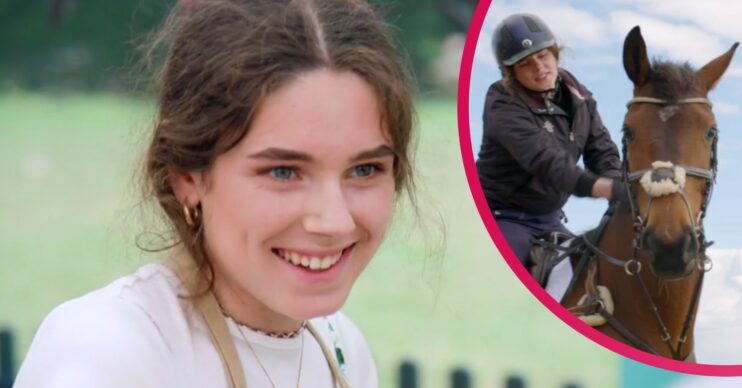 The Great British Bake Off: Contestant Freya divides viewers with her hair

Quite the head of hair!

The Great British Bake Off contestant Freya Cox has bothered some Channel 4 viewers with her approach to cooking on the show last night.

The 19-year-old vegan baker from Scarborough has won over fans on social media for not using animal products in her bakes.

But not everyone is as impressed with her tendency to leave her locks loose as she wields a rolling pin.

Freya put in a decent effort during the second episode of the GBBO 2021 series last night (Tuesday September 28).

She made ‘Brandy Snapuccinos’ as her signature dish for Biscuits Week and came third in the Technical Challenge.

However, while her creations were well received, some viewers wondered whether Freya may need to take a few other measures.

Most prominent among the less-than-positive remarks made about her on social media regarded her long hair.

It seems some people watching at home were concerned Freya’s hair wasn’t covered or tied up properly.

However, similar criticisms did not appear to be tweeted about other contestants.

All I see when I look at Freya is hair in the dough.

One viewer wrote on Twitter during the broadcast: “All I see when I look at Freya is hair in the dough #GBBO.”

Another tweeter remarked about the psychology student’s appearance: “I need Freya to scrape back her hair #GBBO.”

And a third person was also less than complimentary, describing her hair as a “mess”.

They wrote: “Freya needs to brush her hair.

“Can we start a GoFundMe page for a hair brush for that mess on her head? #GBBO.”

However, not everyone was put out by how Freya styled her hair.

As the voiceover from Noel Fielding explained as she talked though her Snapuccinos with Paul Hollywood and Prue Leith, Freya has been a competitive showjumper since she was 14.

And it seems one viewer certainly appreciated that – and her mane.

They wrote: “Freya is a cheery horse girl with the longest hair I have ever seen, and I’m here for it #GBBO.”

The Great British Bake Off continues on Channel 4 on Tuesday October 5 from 8pm.