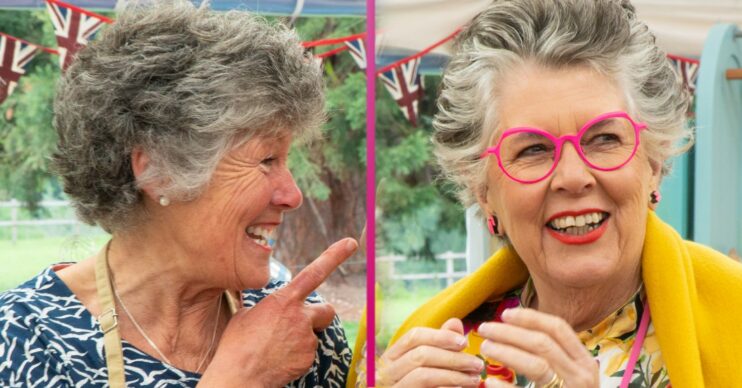 Did they really look-alike?

Maggie in The Great British Bake Off 2021 caused quite a stir last night in the series opener (Tuesday September 21).

One of the great pleasures of Bake Off is getting to know the new contestants, and one stood out from the crowd.

Maggie in The Great British Bake Off 2021

Among the 12 bakers was 70-year-old Maggie, who listed bread making as one of her favourite kitchen skills.

She also listed canoeing, kayaking and sailing in her spare time. Not bad for a retired midwife.

Read more: The Great British Bake Off viewers all have the same complaint after episode one

What did Paul say to Maggie and Prue?

As the contestants got down to their work and tried to create 12 identical mini-rolls, Paul Hollywood and Prue visited Maggie at her workstation.

Paul asked her: “Have you practised this Prue… Maggie?

“When were you separated at birth?”

While Maggie saw the funny side, Prue didn’t seem to as much.

And, throughout the episode, there were constant references to the look-alikes.

Prue and Maggie after this episode #GBBO pic.twitter.com/IO2eF9QJXJ

So here for Maggie replacing Prue for the rest of series and literally nobody noticing #GBBO pic.twitter.com/w4XbsVfmBO

How did viewers react to Maggie and Prue?

Viewers took to Twitter after they first saw the two together and shared some hilarious memes.

One used the now-famous Spiderman meme, labelling one Spiderman Maggie and the other Prue.

Another showed a gif of two women sharing huge glasses of wine. It said: “Prue and Maggie after this episode…”

Another showed Maggie with a pair of pink glasses drawn on, and said: “So here for Maggie replacing Prue for the rest of the series and literally nobody noticing.”

In fact, another wished they got their own show together.

“I want a Maggie and Prue travel show please and thanks,” one said.

However, as Paul continued to joke about the resemblance, one fan begged him to stop.

They said: “Paul, let the Prue Maggie joke go, we beg you #GBBO.”