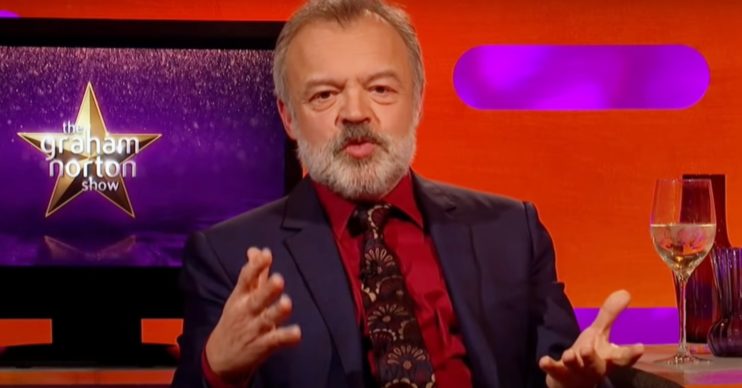 The Graham Norton Show to return for new series in October

The BBC One programme will return in October

A new series of The Graham Norton Show is coming to screens next month with a number of Covid-friendly changes.

Irish presenter Graham Norton will be back in October for all new episodes of his popular BBC One talk show.

For the first time since before the lockdown, the programme will film live with a studio audience.

Bosses have confirmed they are making a number of changes to make it safe for everyone on the set, as the coronavirus R rate continues to climb.

What will be different on the new series of The Graham Norton Show?

A spokesperson for the show said the studio audience will be “smaller than usual”. This will allow those watching to adhere to all the necessary social distancing rules.

Similarly, guests will be properly separated. Instead of The Graham Norton Show’s iconic sofa, celebs will instead speak to the host from individual red chairs. The chairs will be “spaced apart from each other”, the rep said.

While most guests will join Graham and the audience in the studio, some – including country singer Dolly Parton and Four Lions actor Riz Ahmed – will speak remotely.

The others confirmed among the line-up are actor Rupert Everett, comedian and actress Lolly Adefope, stand-up star Sara Pascoe and musical guest Roisin Murphy. The latter will be on to perform her single Murphy’s Law.

The popular Red Chair feature – in which members of the audience get a chance to tell their most hilarious, shocking and outrageous stories – will also be making a comeback.

It marks a resuming of normal service for the long-running talk show, which continued after lockdown with a stripped-back, video call version.

The new format left those watching at home divided. On social media, some said it just didn’t feel the same as the programme they were used to seeing.

But others said they enjoyed it and defended Graham Norton. Many of whom praised the host’s valiant effort to keep the show running despite the pandemic.

Are you excited at the prospect of having it back on your screen? Leave us a comment on our Facebook page @EntertainmentDailyFix and let us know.