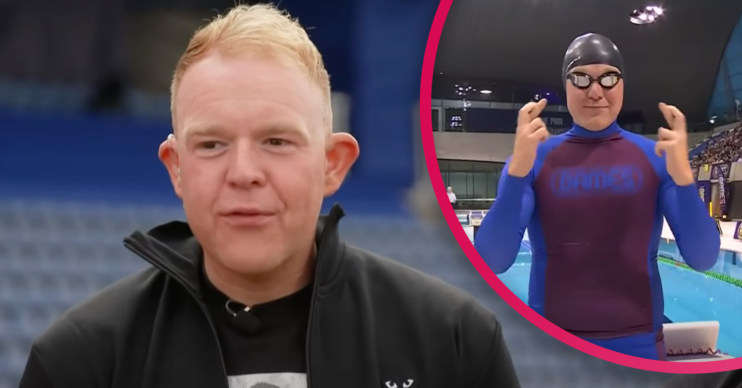 He's taken to it like a duck to water now though!

The Games star Colson Smith has opened up about why he never learnt to swim before joining the ITV reality show.

The Coronation Street star, 23, wowed fans in the Olympic pool on the ITV reality show.

However, he hasn’t always been so confident.

Colson Smith on The Games

Colson smashed his personal best by more than 10 seconds on The Games after the Mens 50m freestyle.

He looked at home in the water – but a few years ago it was a different story.

The actor explained he was bullied when he was younger because of his size.

Speaking to The Sun, he said: “As a kid I never wanted to be in a swimming pool. For me it was associated with humiliation.

“In school, with your top off, being fat, you don’t want to go swimming. Swimming was a big no-no.”

However, once he got the call from ITV, the star said he started with a doggy paddle and things “progressed from there”.

Colson dropped a whopping 10 stone in two years and recently shared the secrets behind his success.

The actor, who plays Craig Tinker on Coronation Street, said he made big changes to his lifestyle during lockdown.

He started running and as a result felt lighter physically and mentally.

Read more: Who’s who in the cast of Emmerdale 2022

The star said he wanted to incorporate his weight loss into a Corrie storyline.

Unfortunately, it wasn’t possible because of the effects lockdown had on filming.

Fans can’t wait to tune in and watch Colson strut his stuff.

However, he recently spoke about picking up an injury after training for the hurdles.

Speaking on the Sofa Cinema Club podcast, he said: “You put your hands in the blocks and when you raise up for ‘set’ my thumb has kind of slipped, because it was wet.

“I can’t tell you what happens, because it goes out tonight, but I was a thumb down. I had to get strapped up for it, it was touch and go.”

We hope Colson recovered and can’t wait to tune in tonight and find out!

The Games is on tonight at 9pm on ITV.

Who do you think will win The Games? Leave us a comment on our Facebook page @EntertainmentDailyFix and let us know.