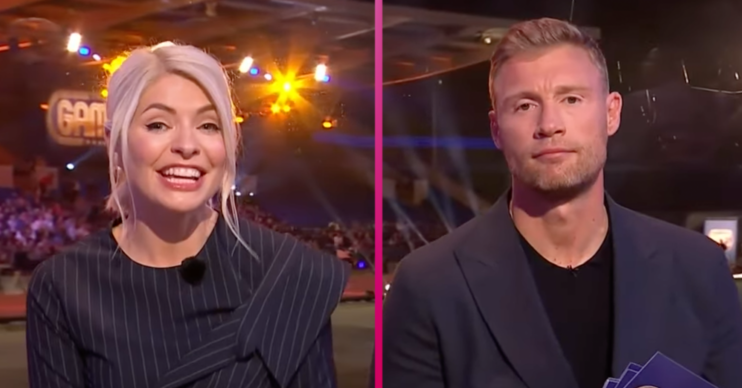 The Games 2022: Fans spot something missing between Holly Willoughby and Freddie Flintoff

The pair are having a ball on screen this week

The Games 2022 continues tonight (May 12), with fans pointing out something they think is missing between hosts Holly Willoughby and Freddie Flintoff.

ITV’s newest reality show airs all week this week, with the final taking place on Friday night (May 13).

Holly and Freddie have proved to be the perfect partnership on the show, but fans have spotted something missing between the pair…

The Games 2022: Praise for Holly and Freddie

Holly and Freddie have earned praise on social media for their presenting skills on The Games.

“Holly and Freddie are a handsome pair together,” said one fan of the pair.

“Loved it when you and Freddie jumped in the pool,” said another, tweeting the This Morning star.

A third commented: “About time someone on TV who doesn’t give a damn.. Freddie Flintoff with no limits and jibes working well with Holly.”

However, others pointed out that something appeared to be missing between the pair.

And that something appeared to be space.

Yes, some viewers took to Twitter to comment that the hosts were sitting so close together they were practically on each other’s laps.

“Is it me or does Holly keep trying to sit on Freddie’s lap?” joked one.

“That guy presenter sitting VERY close to you! It makes me feel uncomfortable,” said another on Instagram. “You look gorgeous as always, though.”

“I did think wow they are close!!!” said another.

That guy presenter sitting VERY close to you! It makes me feel uncomfortable.

Others did admit to missing Holly with her regular TV husband Phillip Schofield, though.

“It was a bit weird not seeing you with Phillip. I’m loving The Games. You and Freddie [fire emojis],” another commented.

Holly’s outfits on the show have also proved to be a bit of a talking point.

Earlier this week, she jumped into the pool fully clothed, with fans fearing for her lovely shorts suit.

Last night, however, the likened her look to a Greggs cheese and onion pasty!

The Games continues on ITV all week at 9pm.