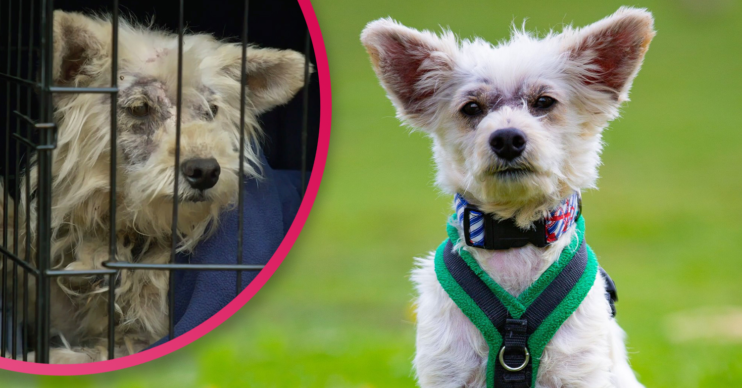 The Dog House on Channel 4: Viewers demand jail time for people who neglect their pets

Calls came after poor Grant's appearance on the show

Distressed viewers of Channel 4 show The Dog House have called for prison sentences for those who neglect animals.

The comments came after they witnessed the cruelty suffered by a dog called Grant on last night’s show (March 25).

Grant was found abandoned on a farm with severe matting that vets said had happened over “two or three months”.

What happened on The Dog House on Channel 4 last night?

Viewers were left in tears as Grant was brought into the Wood Green animal centre.

“He’s shaking,” rescuers said as they took him out of his cage.

“When a dog’s been really really neglected that just shut down. He doesn’t even want to move,” they added.

“It’s almost like they’ve just given up. When you see an animal in that state, when you see what they’ve been through, you just want to fix it for them.”

What did viewers say about poor Grant?

There wasn’t a dry eye in the house when Grant’s story played out on screen.

“Anyone that is cruel to animals, hurts them, mistreats them in anyway should be banned from keeping animals for life and have a tattoo on their forehead telling everyone what they are.

There should be prison sentences for anyone who mistreats dogs in the way that Grant has clearly been mistreated or neglected.

“Absolutely no need for it!!” slammed one viewer.

Read more: Over 1.6m Brits kiss their dogs on the lips – but is it cute or revolting?

“There should be prison sentences for anyone who mistreats dogs in the way that Grant has clearly been mistreated or neglected,” said another.

“Oh Grant is a Westie. That goes to show what bad shape he was in when they first rescued him. He didn’t look like a Westie,” said another.

They added: “I hope whoever left Grant to suffer like that is having a [bleep] awful time right now.”

“Who could abandon such a sweet dog?” asked another.

The Dog House on Channel 4: Did Grant get a new home?

Staff at Wood Green got to work on Grant and gave him a “glow up”, which left viewers weeping.

And the tears continued to flow as they saw Grant rehomed to a lovely couple who live on a houseboat.

It’s safe to safe viewers were over the moon to see Grant “living his best life”.

“So happy Grant got his happy ending on #thedoghouse,” said one.

“So pleased for that wonderful little white hero of a dog tonight and now he’s living the dream on a barge and wearing a little scarf,” said a third.

‘Grant landed on his paws there’

“Omg Grant. Landed on his paws there after a rough start in life,” said another.

“I will be thinking of Grant and the lovely couple that adopted him on their perfect little canal boat for a very long time. I hope they’re thriving,” said another.

“Broke my heart to see him so sad, so happy he now has a lovely home and is loved so much,” another viewer commented.

“This was an amazing ending to such a sad story! I’m so happy for him,” another concluded.

Head to our Facebook page @EntertainmentDailyFix and tell us if you tuned into The Dog House on Channel 4 last night.