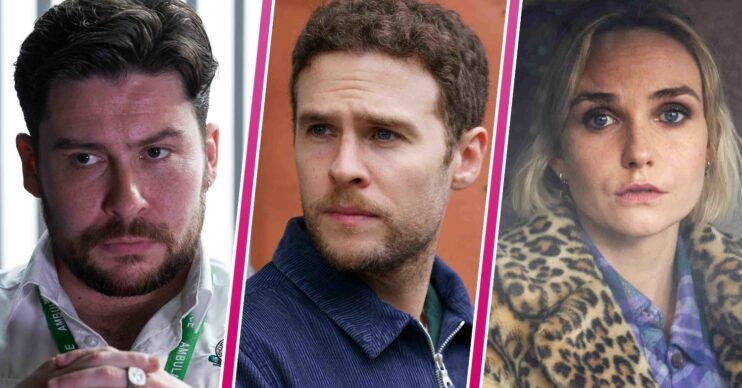 The Control Room is the latest gripping drama from BBC One, and it has a cast of actors from Game of Thrones, Line of Duty and Roadkill.

The three-part thriller airs over three consecutive nights this week, and will leave you guessing until the very end.

So who stars in the cast of BBC series The Control Room?

Glasgow-born actor Iain De Caestecker, 34, portrays lead character Gabe in the cast of The Control Room on BBC One.

He’ll be known to Coronation Street fans as the original Adam Barlow!

Iain’s first appearance on TV was when he was just 12 years old.

He played Billy in the short film Billy ands Zorba, before portraying Nigel in the film The Little Vampire.

The Scottish actor went on to appear in Monarch of the Glen, Rockface and 18 Years of Alcohol, before he won the role in Corrie.

He’s since appeared in dramas including Lip Service, The Fades, and Young James Herriot.

More recently, he’s appeared in Roadkill, and Us.

Playing Gabe in primetime BBC thriller The Control Room is arguably his biggest role to date.

Actress Sharon Rooney, 33, portrays Gabe’s boss DI Breck in the cast of The Control Room on BBC One.

She was born in Glasgow like her The Control Room co-star Iain De Caestecker.

Sharon is perhaps best known for her central role in My Mad Fat Diary.

She played Rachel ‘Rae’ Earl between 2013 and 2015, and Sharon admits it’s the role she’s most recognised for.

The actress has also appeared in numerous TV series including Two Doors Down, Sherlock, Mountain Goats, Brief Encounters and The Tunnel.

Sharon portrayed Faye Caddy in No Offence, Barbara in Zapped, Ruth in Jerk and Becky in The Capture.

Disney fans will know Sharon from her role as Miss Atlantis in Tim Burton’s Dumbo in 2019.

Most recently, she played Doreen in McDonald & Dodds, Josephine Wain in The Electrical Life of Louis Wain, and Bertha in Deep Heat.

She also played jealous teacher Nina in the cast of The Teacher on Channel 5.

Line of Duty fans will recognise her as PC Tatleen Sohota, a role she played for six episodes in 2019 during series 5.

She’s probably well known for playing Roxy in the cast of The Syndicate series 4, too.

Taj has been on our TV screens ever since 2012, when she first appeared as Megan in In with the Flynns.

She’s since starred in Miranda, Moving On, The Break, No Offence, and Trying.

Other significant roles have included Jasmin in In the Club, Jasminder in Stella, Reshma in Pitching In, Hana in Cold Call, and Elara in Truth Seekers.

Most recently, she’s played Special Agent Linda Amisted in the film Memory, and Rana in Hullraisers.

Scottish actress Joanna Vanderham, 31, appears as Sam in the cast of The Control Room on BBC One.

She was nominated for an International Emmy Award for her debut role as Cathy in the Sky One crime drama The Runaway in 2011.

Joanna went on to play Jenny Muirhead in Young James Herriot, Amanda Delany in Above Suspicion, Ellie in Marple, and Pamela in Dancing on the Edge.

Her film roles have included Margo in What Maisie Knew, Jessica in Blackwood, and Sunny in Eddie & Sunny.

Other significant roles include Kitty McVitie in The Banished, and Denise Lovett in The Paradise.

He is known for playing the head of MI5, Stephen Hunter-Dunn, in the BBC’s Bodyguard.

Stuart has been on TV since 1996, and has appeared in the likes of Holby City, The Bill, Taggart, and Doctors.

He also played Dr Mark Denham-Johnson in the chilling David Tennant thriller Deadwater Fell, and Graeme Stanton in The Serpent.

Thirty-year-old Scottish actor Daniel Portman stars as Anthony in the cast of The Control Room on BBC One.

Game of Thrones fans will most definitely recognise the actor as loyal knight Podrick in the series.

He played the role in all eight seasons of the epic HBO drama.

Film roles have included Angus McDonald in Robert the Bruce, Max Kavinsky in In the Cloud, and Frank in The Journey.

Who else stars in the cast of The Control Room on BBC One?

Absentia actress Rona Morison portrays Danni in the cast of The Control Room on BBC One.

Taqi Nazeer, who played Larson in Shetland, is Jat.

TV viewers might know actress Charlene as Jac Dunn in River City, or Ronna Ricardo in The Trial of Christine Keeler.

What’s been your favourite BBC One drama recently? Leave us a comment on our Facebook page @EntertainmentDailyFix.