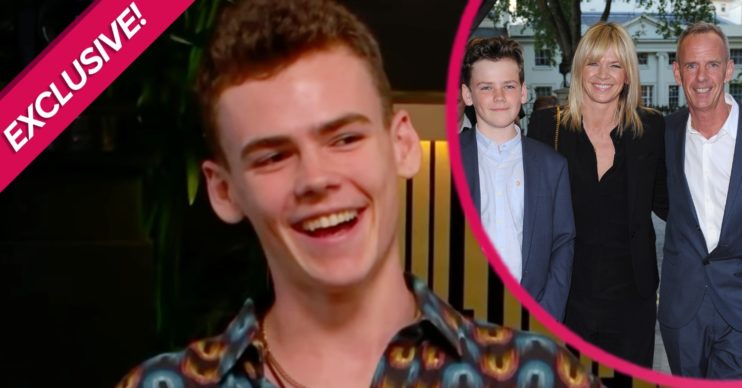 The Circle: Woody Cook reveals his famous parents have ‘more faith’ in him since the show

After proving popular on the last series, Woody opens up to ED!

The Circle star Woody Cook has admitted his famous parents – Zoe Ball and Norman Cook – have more “faith” in him since leaving the show.

The 20-year-old student made it to the final of the popular Channel 4 series in 2019.

And while he appeared to be a hit with viewers, Woody revealed to Entertainment Daily his parents were his biggest supporters.

In fact, the reality show made Zoe, 50, and Norman, 57, look at their son in a completely different light.

What did Woody Cook say?

Woody told us: “Yeah, they were worried at first. They were like, ‘Don’t mess it up!’

“But once they saw it, they were really impressed with me. They’ve had more faith in me since then.

“It was one of those things where I was still a child until they saw me on it. They were like, ‘Oh my God, he was listening all those years!'”

However, Zoe and Norman had plenty of advice for Woody after the show.

Read more: The Circle Series 3 cast: Hunter from Gladiators is among them!

He added: “They basically told me to live my life because you’re only young once.

“If go chasing all the glitz and glam, there’s a time and a place for it. I’m just enjoying being young and I’m off at uni now.

“I was one of the youngest people on The Circle, so a lot of them had time at uni. They [his parents] were basically like, ‘Come on Mr. Celebrity, you’re actually just a teenager.’ I really like that.

“I went off the radar and went back to being me.”

Following in Zoe and Norman’s footsteps

While Woody is proud of his upbringing, he wants to make a name for himself.

Woody, who is set to release his own music label, explained: “That was my angle for going on the show, but I’ve never felt too much like that. There’s always people who will say, ‘Oh, you’re Fatboy’s son!’

“I can always see if someone likes me for me or mainly there because of my dad or mum. It’s obvious for me.”

I can always see if someone likes me for me

As well as Woody, Zoe and Norman also share 11-year-old daughter Nelly together.

At the time, they said: “We are still great friends and will continue to support each other and raise our beautiful children together, living next door but one.”

Woody opens up on The Circle

So, what does the former contestant make of this year’s line up?

He told us: “This series makes me anxious watching it. It really takes me back. So far, I’m scared of Manrika! She’s very much with it and knows how the game works a lot more than I did.”

The reality star added: “It was weird going into lockdown after doing The Circle.

Read more: Who is the narrator on The Circle Celebrity and when is normal The Circle back on?

“It’s not as hard as lockdown because there’s always something to do and there’s a purpose. I feel like in lockdown it’s easy to feel like there isn’t a purpose.”

And the star has nothing but fond memories of the show – even though he didn’t do much research beforehand!

In addition, Woody said: “I figured if I wanted to go in and by myself, then literally having no idea of what was going to happen was the best way to do that.

“I didn’t want a play any games or see what people done last year, I wanted it to be a surprise. And it really was!”