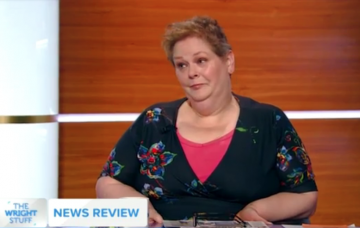 Quiz show star was a guest on The Wright Stuff

The Chase star Anne Hegerty left viewers stunned when she said transgender activist Paris Lees “used to be a boy” on live telly.

Anne – better known as quiz queen The Governess on the hit ITV afternoon gameshow – had disagreed with campaigner Paris during a debate on Channel 5’s The Wright Stuff over gender pay gaps.

Anne explained she’s “on record as not really being terribly bothered” about pay inequality and said career progression was down to individuals themselves.

“I don’t believe there’s a cabal of men all putting their heads together going: ‘Oh, we’ve got too many girls on this board… No, no, no no – let’s just have our mates.'”

Paris asked: “So you don’t think there’s an old boys’ club at the top then?”

Anne replied: “No, no not really.”

And when Paris suggested they would have to agree to disagree, Anne said: “Okey doke. Well you used to be a boy, you’d know that.”

There was a silent pause before host Matthew Wright moved the conversation on.

Paris later told The Sun Online she did not discuss the moment with Anne backstage once the show had ended – but she was “shocked” by the unexpected remark, particularly as it was made on TV.

She said: “It was so shocking. The whole studio – the audience fell silent. I don’t think anyone knew what to say. You could have cut the atmosphere with a knife.

“I was so shocked, I was processing it. I didn’t make a big deal out of it. I love the show and Matthew, and I’m sure she didn’t mean to be malicious. I hope she didn’t mean it to come across the way it did.”

Viewers were not quite as sympathetic, with some expressing shock over Anne’s remark.

#thewrightstuff why did anne hegerty reference @parislees in the way she did? “Well you used to be a boy you should know!” My jaw dropped to my knees!!

I think Anne Hegarty should apologise for that comment about the boys club. I hope she does @parislees

#thewrightstuff #annehegarty Oh how awkward is the panel now, after that totally unnecessary comment by #AnneHegarty “you used to be a boy”

During Friday’s The Wright Stuff, guest presenter Anne Diamond apologised to Paris and viewers on behalf of the show.

She said: “Just a quick word about yesterday’s programme.

“Yesterday during a discussion about gender pay with Anne Hegerty and Paris Lees, Anne made a remark to Paris about her gender. Now, we apologise to Paris and anyone at home who was offended by what was said.”

What do you make of Anne’s comment? Head over to our Facebook page to join the conversation – @EntertainmentDailyFix.