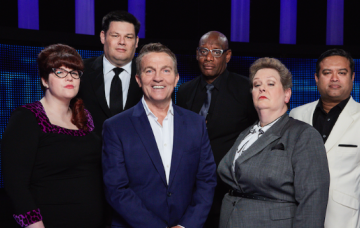 Jenny Ryan’s The Chase co-stars have weighed in after she suffered a record defeat at the hands of a contestant.

Contestant Judith, walked away with a record-breaking £70,000 after pushing Jenny – AKA The Vixen – back several steps during their game.

Host Bradley Walsh congratulated her on her victory, saying he’d “never seen anything like it.”

Read more: Jamie Redknapp “knocked back by Nicole Scherzinger for a date”

Jenny graciously took to Twitter to praise her successful opponent, saying: “I’ve been awaiting the broadcast of this episode… Judith is such a memorable contestant!”

She went on to complement what she described as “perfect play” that lead to Judith walking away with the prize.

Absolute perfect play by Judith. £70k at table with nothing to lose. She set a very strong 20, which forced me to rush slightly. Then capitalised on my errors by nailing pushbacks – which further put the time pressure on me, leading to more errors. #TheChase https://t.co/sXxCqM9F3a

But Twitter trolls took aim at the defeated chaser, with some suggesting the loss should mean the end of The Vixen’s time on the show.

Jenny hit back at the criticism, claiming that if the chasers never lost, there would be no point in the show.

“It would be a very boring show if us Chasers won every time! We actually love it when great quizzers get on the show, we love a challenge!” she tweeted.

It would be a very boring show if us Chasers won every time! We actually love it when great quizzers get on the show, we love a challenge! #TheChase https://t.co/NvZpsGAUXe

Jenny’s co-stars have also waded in to the social media fray, defending their fellow Chaser and the concept of an exciting quiz.

Mark Labbett – AKA The Beast – suggested there was sexism behind the attacks on Jenny.

Interesting, Jenny has by FAR the best win-loss record on #thechase over the last three years yet the moment she loses (to a great solo 20) somebody calls for her to be sacked. Everyday Sexism?

He also noted he has never come in for calls for his head from fans.

Nobody has EVER called for me to be sacked or replaced

Paul Sinha – AKA The Sinnerman – reminded people not to take the show so seriously.

Right back to work. Just to say the Chase is a fun quiz show where four members of the public try to beat a quiz pro. Fun. It’s fun.

He also recalled his own “Judith moment” saying “I was taken for 50k by a solo player. Had one q to catch her with 25 seconds to go, then fell apart.”

Meanwhile Anne Hegarty – AKA The Governess – teased another big win in an upcoming episode.

I have an absolutely horrific loss coming up that’s going to make @jenlion look like Kevin Ashman. https://t.co/lAMH4ay57B

What did you think of Judith’s victory? Leave us a comment on our Facebook page @EntertainmentDailyFix and let us know.