The Chase fans in uproar as contestant breaks golden rule

Never take a low offer. Ever.

For die-hard fans of The Chase, there is one golden rule that contestants must always follow: do not accept a low offer. Ever.

On last night’s episode (Wednesday 19 February), one contestant broke that law and ended up bearing the brunt of viewers’ frustration, as his team eventually went away with nothing.

There was still no sign of Shaun Wallace, aka The Dark Destroyer, even though his image appeared as one of the potential Chasers. Instead, Jenny Ryan, The Vixen came out of the shadows as the one to beat.

Her first opponent was Sue, 56, an administrator from Mid Glamorgan. Sue managed to put the respectable sum of £6,000 into the pot via the cashbuilder and returned triumphant to her team mates.

But next up was Kojo, a 23-year-old singer from Kent. He told host Bradley Walsh he was hoping to buy a car, preferably a Corsa, with his winnings. But after a disastrous multiple-choice round, Kojo opted for to play for just £300 from the Vixen.

People on Twitter were quick to express their horror at Kojo’s decision to go for such a low offer. 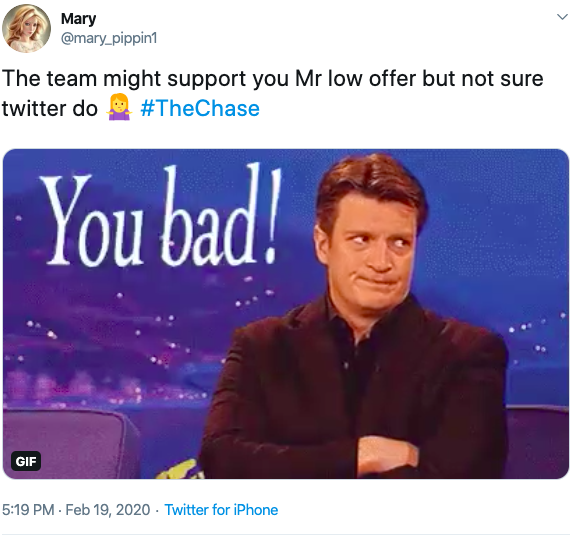 One commented that Kojo couldn’t even buy scrap metal for that sum, let alone a decent car, while another gave him a cruel but funny nickname: ‘No dough Kojo.”

The next two players were Liam, 42, a first aid trainer from Norfolk and Rachel, 38, a psychotherapist from Sheffield.

They both managed to raise the prize pot to more than £16,000, meaning that if the full house of four players beat the Chaser in the final round, then each person would go home with at least £4,000.

Once again, poor Kojo was the criticised by viewers, who pointed out that he’d be benefitting from their expertise without having contributed much (er, but isn’t ‘teamwork’ the whole point of being on a team?)

In the final round, Rachel answered most of the quickfire questions, bringing their total to 18 correct answers.

Would that be enough to beat the Chaser? Sadly not.

Despite the odds being four players against one, The Vixen comfortably answered all her questions and the team went away with nothing. 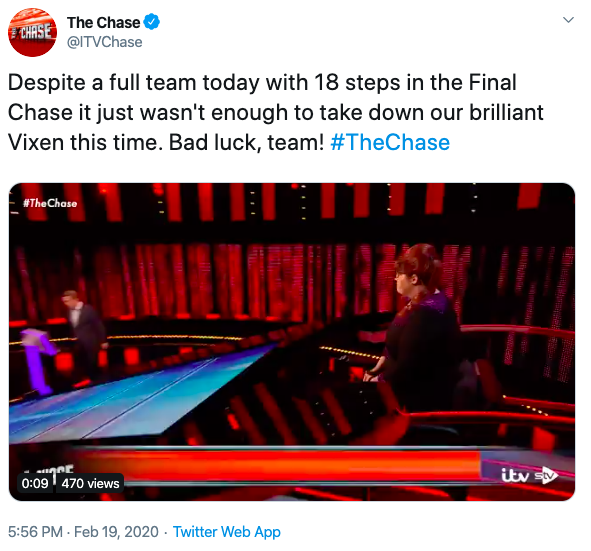 Could you beat a Chaser? Leave us a comment on our Facebook page @EntertainmentDailyFix and let us know what you think of this story.