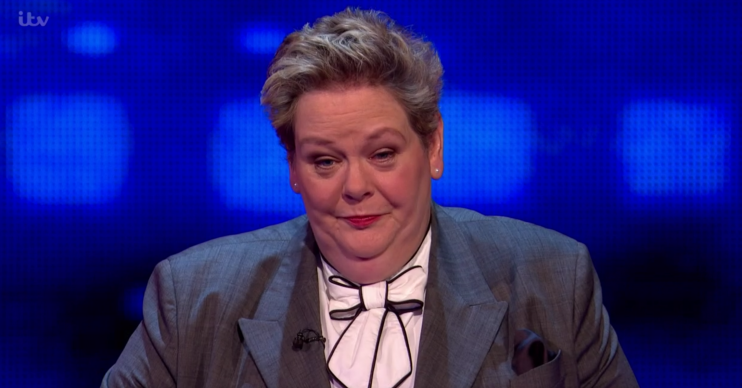 But she still squeaked out a win, even with the numbers 'against her'

Anne Hegerty as The Governess is unquestionably one of The Chase‘s most loved personalities.

But Thursday’s airing of the ITV game show saw the quizzing favourite lose ground in the popularity stakes after an ‘extra’ contestant joined the team of Katie, Graham, Craig and Debra who hoped to beat her and claim a sizeable pot of cash.

All four contestants made it through their Cash Builder and one-on-one rounds with The Governess – but according to host Bradley Walsh, one player may have had a little extra help.

That’s because Craig from Cheshire was accompanied by Fred, his guide dog. A fundraiser for guide dogs himself, Craig told Brad he hoped any share of the winnings he may get would go towards a new big telly for them to watch at home.

“You raise funds, do you?” The Governess bantered away as Craig stepped up to challenge her after accruing £4,000 in his Cash Builder.

Fred, you’re not giving him the answers are you?

But despite The Governess’ efforts at throwing him off, Craig had an extremely strong and efficient round. He got away from the Chaser quite easily with correct answers about Scouting for Girls, hunting, Coca Cola and two accurate responses concerning naval battles and F1 – both of which Craig admitted were not his preferred subjects.

“Fred, you’re not giving him the answers are you?” Bradley joked, looking down to the pooch.

He continued: “Put that book away!”

The Governess reflected on Craig’s performance: “That was extraordinarily good and I had no chance of getting close.”

Alas, Fred’s presence did not spur the contestants on to victory in the final, despite an impressive attempt which saw The Governess come in for five pushbacks before she finished them off with just five seconds to spare.

And although The Chase viewers love The Governess, some were put out that Fred would not get to enjoy a new TV with his owner.

“Want the team to win, purely because of Fred #TheChase,” one person wrote on Twitter.

And someone else warned: “Don’t you rob Fred of his winnings, Anne #thechase.”

Following the result, one social media user suggested: “Whip round to get Craig and Fred their massive telly?? Thumbs up #TheChase.”

Echoing that thought, another person tweeted: “Right need to get Craig and Fred their 70” telly #TheChase.”

Fred the guide dog is gorgeous, such a good boy #TheChase

Fred is my favourite ever contestant #TheChase

And one very upset observer shared a snap of a forlorn-looking Fred with the caption: “When you thought you were gonna get loads of treats but Anne decided to be a [blank] #TheChase.”

She was just playing the game as it is supposed to be played!

– The Chase returns to ITV tomorrow, Friday March 13, at 5pm