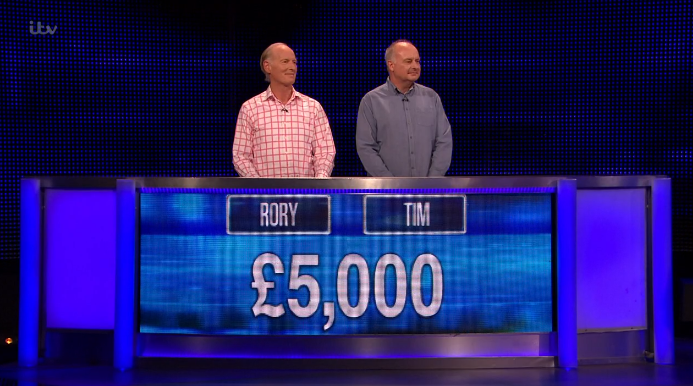 Viewers of The Chase have branded tonight’s final chase a “shambles” and “abysmal”.

Canadian contestant Sarah wowed viewers when she went for a high offer of £35,000 despite admitting her British knowledge wasn’t great.

However, Sarah was knocked out of the final chase along with Sophie.

During the final chase, the pair bagged 12 steps and host Bradley Walsh admitted they will need some pushbacks “there’s no doubt about that”.

However, The Governess beat the team with 41 seconds remaining.

Well done Anne couldn’t have been a better result.

One person said: “Well done Anne couldn’t have been a better result #thechase.”

Another wrote: “Shambles, no way [will they win] The Governess in form.”

A third tweeted: “That final chase was abysmal #TheChase.”

Well done Anne couldn’t have been a better result #thechase

It comes after a contestant angered viewers on Wednesday’s show (March 18).

David managed to get £5,000 in his cash builder round and went on to face the Chaser Paul Sinha – also known as The Sinnerman.

David decided to take the minus offer in order to get back to the team.

He explained: “The most important thing is for me to get back. I know the team won’t be too happy but to make sure I get back I’m going to go for the -£4,000.”

Viewers were fuming and shared their thoughts on Twitter.

One person said: “Oh dear David. I quite liked you too. Robber.”

Another wrote: “Naaaaah. Someone just took MINUS 4 GRAND ON THE CHASE #TheChase.”

A third added: “Hope this guy on #TheChase gets caught. Hate when they take the minus offer.”

The Chase returns to ITV tomorrow, Friday, March 20, at 5pm.