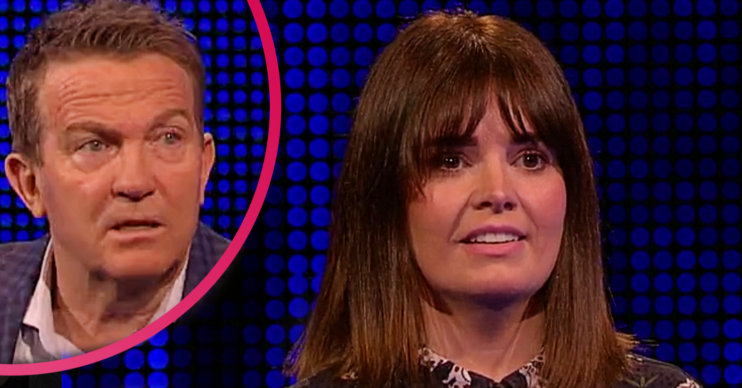 Emma was a natural beauty

The Chase viewers were stunned when contestant Emma revealed her age earlier this week.

Bradley Walsh hosted another all-new episode of the ITV game show and welcomed the civil servant from Liverpool as part of a new team of four.

And while Emma didn’t do so well, viewers loved her youthful looks and even demanded to know what her skincare secrets were!

What happened when Emma appeared on The Chase?

Richard, Emma, Mary, and David made up the team to try and repel Anne ‘The Governess’ Hegerty.

Emma managed to bag £2,000 in the cashbuilder, and she elected to stick at that total in the head-to-head.

Her reasoning was that she wanted to get back to the team for the final chase.

However, after a really tough batch of questions, Anne soon caught her up and Emma was sent packing.

But it wasn’t her general knowledge skills that impressed viewers – it was her youthful looks.

When she revealed she was 36, viewers went into meltdown.

I need a full breakdown of Emma's skincare routine cos I wouldn't have even said 26, let alone 36 #thechase

#thechase "Dunstable" has to be the best answer, ever. Emma's lush eye candy btw

How did viewers react to Emma?

Another said: “I need a full breakdown of Emma’s skincare routine cos I wouldn’t have even said 26, let alone 36.”

I need a full breakdown of Emma’s skincare routine cos I wouldn’t have even said 26, let alone 36.

A third thought that she looked like Victoria star Jenna Coleman.

Skincare regimen aside, Emma came up against a tough competitor, Anne.

Meanwhile, Anne recently opened up about her lockdown experiences.

While most people struggled, Anne revealed that lockdown may have saved her from “breakdown”.

Speaking with the Daily Express, she said: “By the time lockdown came in, I was so burnt out.

“There was just so much on my plate, there were so many things I was planning on. I look now at my diary for the beginning of last year and I think, ‘Well, you kind of were about to have a breakdown.'”

She also admitted that she loves her own company and embraced the solitude.