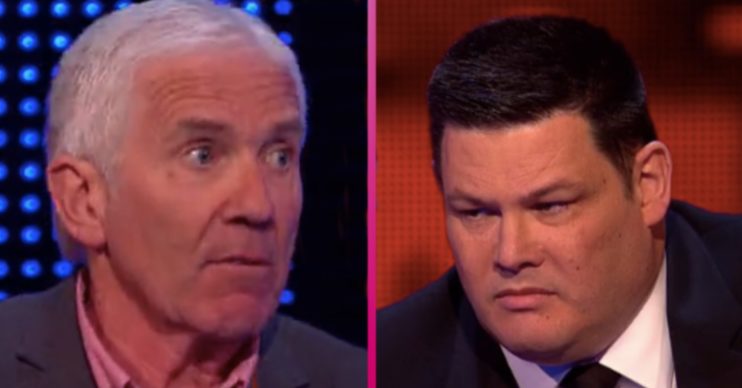 The Chase viewers fuming as they sit through ‘most annoying’ episode

Mark did terribly - but he still won!

The Chase viewers were fuming over Friday night’s episode on ITV.

Many ranted that this particular instalment’s final round was ‘annoying’.

What happened on Friday’s episode of The Chase?

Contestants Terry and Donna were doing fantastically well up until the final chase.

However, they flummoxed a couple of easy answers and were plagued with bad luck.

In one instance, Terry had the right answer but fatally went with Donna’s incorrect one.

Sadly they lost out, with a frustrated host Bradley Walsh saying: “Team, eight opportunities to push back, only three executed out of the eight.

Sadly, their £13,000 was taken away – and they were left with absolutely nothing.

How did The Beast react?

Mark smugly reacted: “I don’t think I’ve ever played that badly and won.

“I’ve never got eight wrong before and won.”

Read more: Who Wants To Be A Millionaire has new jackpot winner after 14 years

Bradley concluded: “Such perfectionists are our chasers. They’re down when they win!”

One user shared: “Shouting at the TV because of #TheChase. This team are the unluckiest I’ve ever seen!”

Another viewer lamented: “This has to be the worst and most annoying chase I’ve watched! I’m so upset for them, I wish Donna was a bit more confident because she knew two push-back answers that would have made the difference, but allowed the guy overrule her.

“They lost with only two seconds to go #TheChase.”

But others weren’t so sympathetic and appeared to have lost their patience with the contestants.

One Twitter user fumed: “These contestants are annoying me. Look at all these rare chances they’re messing up. #TheChase.”

And a second echoed: “#thechase happy they lost, they annoyed me the way they kept blabbing.”

Further viewers were left worried about Mark aka The Beast’s surprisingly unimpressive performance.

One user shared: “The Beast miles off form, but luckily for him so were the team when it came to the push backs. They overthought the answers and ended up talking themselves out [of] the right answers.”