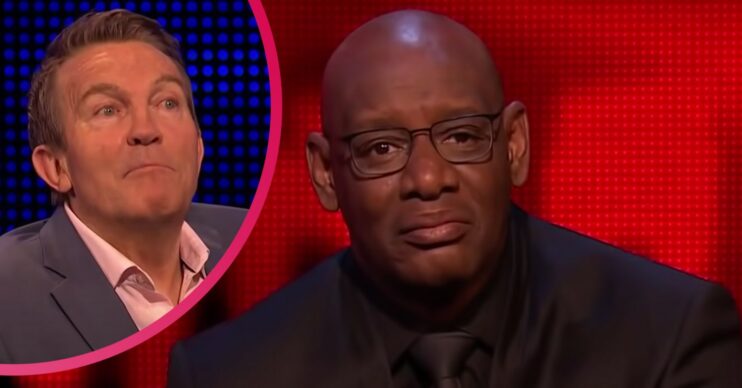 The Chaser wasn't aware of the show host's comments

The Chase star Shaun Wallace has addressed host Bradley Walsh and his comments on his “retirement” from showbiz.

Shaun, 61, is a barrister and known to fans as The Dark Destroyer. He has been a staple of the ITV quiz since it began in 2009.

But in a recent chat, Shaun seemed to be taken by surprise by talk of Bradders calling it a day.

What has Bradley Walsh said about his ‘retirement’?

Back in July, Bradley indicated he will be retiring from TV sooner rather than later.

The 61-year-old – who appears on The Jonathan Ross Show this evening (Saturday December 18) – said he is almost ready to move on from his hectic schedule.

Bradley said: “You know what, in a couple of years time I won’t have to do any of it, I’ll be retired and that’ll be it.”

He joked he understood why viewers may think he is on the box constantly. But that might because he films so many episodes of The Chase in one go.

Read more: Bradley Walsh reveals he will be retiring from TV after over 40 years in showbiz

Bradley added: “I don’t actually have time off.

“I have meetings, I have personal appearances I have to make and stuff like that with other things I’ve got going on, so it’s quite tricky to juggle it about.”

The Breaking Dad star continued: “The Chase allows me to do the other stuff which I really want to do – not that I don’t love doing The Chase.”

How did Shaun Wallace react?

Shaun told the Express he was unaware about any such plans.

Nonetheless, he said he remained optimistic about Bradley staying on at The Chase.

Shaun said: “Let’s hope not, I’ve not heard that.

He’ll be going until his last breath.

“But if I’ve got anything to do with it, he’ll be going until his last breath.”

He also insisted the series would not be the same without the star, who also plays Pop Larkin in The Larkin and hosts Blankety Blank for the BBC.

Who else is on the Christmas episode of The Jonathan Ross Show with Bradley Walsh?

X Factor winner Leona Lewis is also in the line up of guests.

It is the ninth and final episode of the series and it on for an hour and five minutes.

The Jonathan Ross Show is on tonight, Saturday December 18, at 10.35pm.