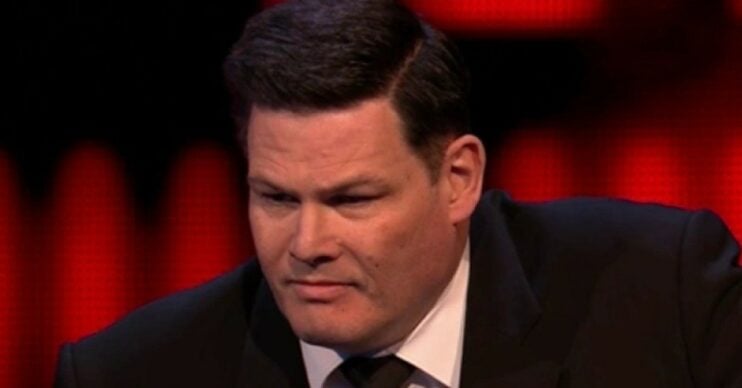 The ITV star shocked viewers with his antics

The Chase star Mark Labbett has been supported by co-star Paul Sinha after he stormed off the ITV show.

The TV quiz star was left frustrated by a result during the latest episode and stormed off before punching the set.

Four players made it through to the final chase and they beat The Beast with only a few seconds left on the clock.

After Bradley Walsh congratulated all four winners, he turned to The Beast and asked what he had to say.

Clearly frustrated, Mark said: “I’m off” before storming off the set.

“I apologise to any kids watching, that is not how you should take defeat,” Bradley swiftly told viewers at home.

Following the episode airing, Mark took to Twitter to apologise for his behaviour.

He also revealed that he’s been struggling with his mental health recently, which only made the loss hit him harder.

“Apologies to those of you disappointed with my behaviour tonight,” tweeted Mark. “My mental health was shot before that game. It was storm off or break down in tears. A remorseless diet of quality opponents didn’t help #thechase.”

Paul Sinha speaks out in support of Mark Labbett

His co-star, Paul, rushed to respond and share his support.

“You should never have to apologise for the crime of being human,” tweeted Paul. “I’d have been nowhere on those questions.”

You should never have to apologise for the crime of "being human". I'd have been nowhere on those questions.

One said: “I assumed you were putting on a show, living up to your Beastie Boy persona. I am sorry if you were feeling unwell at that time.”

“A lot of us can empathise with these negative thoughts and feelings. Love and best wishes to you,” said a second fan.

What did you think of the Beast storming off? Leave us a comment on our Facebook page @EntertainmentDailyFix and let us know!