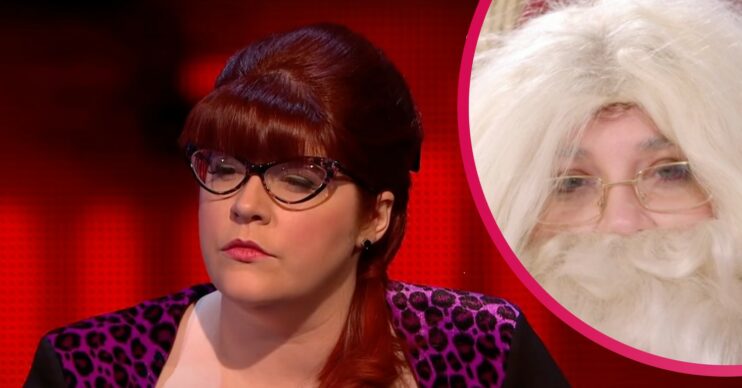 Jenny Ryan from The Chase made a surprise appearance on In For A Penny last night, and viewers were thrilled.

The 39-year-old quizzer wasn’t as recognisable as usual though! She was actually dressed up as Santa!

Why was The Chase star Jenny Ryan on In For A Penny yesterday?

Jenny’s appearance on In For A Penny happened during a segment called “Santa Who Who Who”.

Host Stephen Mulhern explained what contestants had to do during the segment.

“All you need to do is guess the identity of 0ur celebrity hidden in the Santa suit,” he said.

“Now last year I asked for Ed Sheeran, Adele, or David Beckham…and they gave me Chris Kamara, so lower your expectations accordingly,” he joked.

Stephen then welcomed members of the public onto the show, who had to guess who was behind the Santa outfit. They had 12 questions to ask, and ‘Santa’ could only answer with ‘Yes’ or ‘No’.

The guests then threw their questions at Santa as they tried to work out who was behind the big white beard.

Did anyone guess it was Jenny Ryan?

One person initially thought that it was Adele behind the Santa outfit, whilst another thought it was Amanda Holden. One couple were so close with their answer – they guessed it was Jenny’s The Chase co-star Anne Hegerty behind the beard.

Three people managed to guess correctly that it was in fact The Vixen, who was masquerading as Santa Claus. They won £100 each, much to their and Stephen’s delight.

A few viewers on Twitter managed to guess that it was Jenny who was dressed as Santa too. They were also loving her appearance on the show in general.

“Jenny Ryan, voice is so easily distinguishable,” one viewer tweeted.

“Seeing Jenny dressed as Santa has got to be one of the best things that’s happened this year for me,” another said.

“I literally got a tattoo today in honour of @jenlion and my dad guessed it was her before me… THE SHAME,” a third said.

What have the other Chasers been up to?

This isn’t the first time Jenny Ryan has appeared on TV this Christmas. On Christmas Eve, the star appeared on GMB to talk about her Christmas plans.

The Chaser revealed that she was going to be enjoying her mum’s cooking this year.

Jenny’s fellow Chaser, Paul Sinha, revealed yesterday that he had put on weight over Christmas. He jokingly claimed it was the 718th time it had happened.

None of the Chasers have been as busy as their co-star Bradley Walsh over the Christmas period though. The 61-year-old former Doctor Who star was constantly on TV over the festive period, appearing in The Larkins, The Chase, Blankety Blank, and Breaking Dad.

He reportedly picked up a £500,000 Christmas bonus for all his TV work during this year’s festive period.

Did you guess it was Jenny Ryan? Leave us a comment on our Facebook page @EntertainmentDailyFix and let us know.

In For A Penny Jenny Ryan The Chase