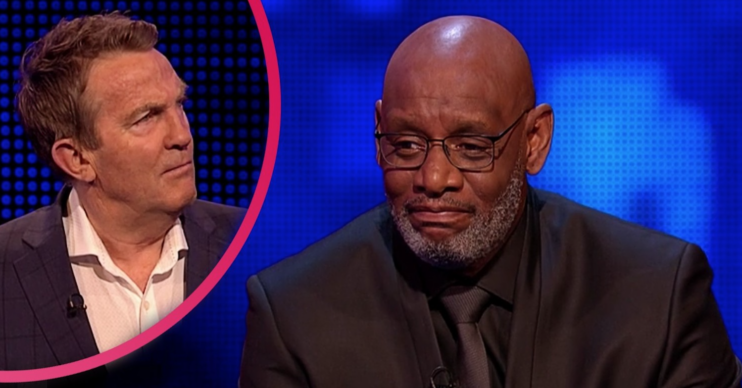 The Chase: Shaun Wallace stuns viewers as he shows off new beard

Shaun – known as The Dark Destroyer on the show – shocked everyone when he strode out with his new facial hair.

Shaun Wallace shows off beard on The Chase

In yesterday’s brand new episode, Dave, Bella, Kieron and Lisa-Jane made up the team to take on the Chaser.

Host Bradley revealed that it would be Shaun that they would be taking on, but everyone had to do a double-take when the 61-year-old trivia king walked down the corridor and into the hot seat.

Rocking a neat grey beard, he looked every inch the distinguished gentleman.

Even Bradders complimented him on his appendage… well, he immediately launched into some banter.

“What have you come as?” Bradley asked.

“You’re no longer the Dark Destroyer. Honestly, he’s supposed to be menacing, but he’s like your favourite uncle now.”

Be still my heart!💖💖
I think Sean looks very handsome with his beard. It suits him💖💖#TheChase pic.twitter.com/21as5S7ztB

I had to do a double take at the TV. That beard looks good on The Dark Destroyer #TheChase

How did viewers react to the facial hair?

Viewers were quick to praise Shaun’s facial hair after he sat in his chair.

Once gushed on Twitter: “Be still my heart! [red heart emoji] I think Shaun looks very handsome with his beard. It suits him.”

Another exclaimed in shock: “OMG SHAUN HAS A BEARD [cry-laugh emoji, fire emoji].”

A third wrote: “I had to do a double take at the TV. That beard looks good on The Dark Destroyer.”

And finally one viewer thought it was an improvement.

“Shaun looks better with a beard tbh,” they wrote.

It’s not the first time a chaser has debuted a new look on The Chase this week.

On Wednesday, Anne ‘The Governess’ Hegerty showcased a much shorter, almost pixie haircut.

Although Anne’s new ‘do divided fans, some showered her with compliments.