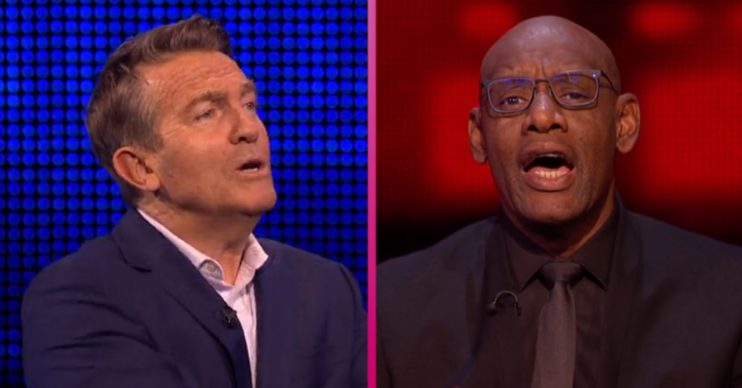 Bradley Walsh had to give him some pointers

The Chase star Shaun Wallace left viewers divided as he showed off his singing voice on the ITV quiz show.

During Monday (September 7) evening’s episode, the Dark Destroyer, 60, was the chaser on to take down Bradley’s team of hopefuls.

What happened on The Chase and why was Shaun Wallace singing?

During 35-year-old digital consultant Ravi’s head-to-head, he had the question, ‘Nat King Cole and Rick Astley both had hits with what song?’

Ravi said Let There Be Love but the correct answer was When I Fall In Love.

As he started singing, Bradley Walsh begged him to stop, saying, “No, no, no, hold on!” but relenting when Shaun pressed on.

Afterwards, Bradley – himself an accomplished singer – offered some constructive criticism. “Marvelous rendition,” he said. “But what I want to know is, why do you start off every song with the same time signature at the same speed, but never the same speed as the song’s supposed to be in?”

Read more: The Chase: Shaun Wallace reveals career advisor told him he’d end up a thief and in prison

After demonstrating what he meant, Bradders continued: “That’s the speed of it. You can’t do the time signature count in and then do the song completely the wrong speed. Imagine if you were conducting an orchestra? What would they do, really?”

What did viewers think of Shaun Wallace’s singing?

Viewers watching at home were divided, with some jokingly praising his efforts and others urging him not to give up his day jobs.

One said: “Can’t beat Shaun and his singing #TheChase.”

“#TheChase shut up Shaun, you clown,” tweeted another.

“Don’t give up your day jobs, Shaun! #TheChase,” said a fourth.

#TheChase shut up shaun you clown

Another put, alongside a sleeping face emoji: “Shut up, Shaun.”

Someone else said: “Can’t believe people want to get rid of Shaun Wallace when every now and again we get singing like that #TheChase.”