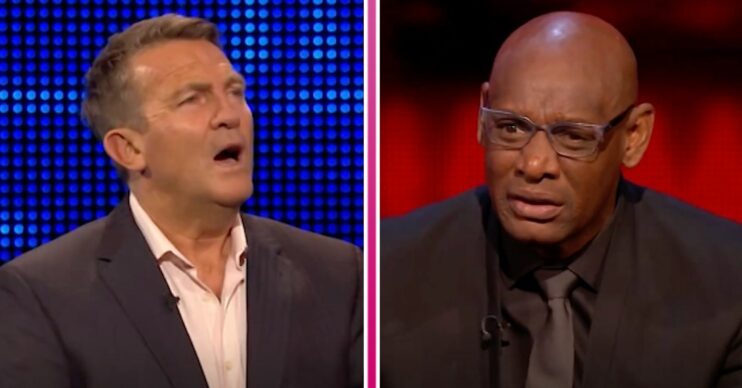 Things got a little heated on the show yesterday

The Chase viewers had a very mixed reaction to Bradley Walsh and Shaun Wallace ‘clashing’ on last night’s show.

The duo had an argument about the 2000 movie, Gladiator – and viewers at home weren’t impressed.

What happened on The Chase yesterday?

Last night’s episode of The Chase saw Allie, Laura, Dai, and Vidal test their wits against the Chaser.

It also saw Bradley and Shaun, aka The Dark Destroyer, butt heads over the iconic Russell Crowe movie, Gladiator.

During Laura’s bout against Shaun, a question about Roman emperors came up.

“In AD41, which Roman emperor was murdered at the Palatine Games?” Bradley asked.

Laura went for Claudius, however, the answer was Caligula.

This then led to Shaun discussing the third answer option – Commodus.

Bradley Walsh and Shaun Wallace clash on The Chase

“Commodus was actually the subject of the film Gladiator, played by Joaquin Phoenix,” Shaun said.

“And Commodus was actually strangled…,” he continued before Bradley interrupted.

“No, no, no, hang on a minute, he was stabbed by Russell Crowe in the thing…” Bradley argued.

“No, Commodus was actually strangled,” Shaun said. “Yeah, but who did Russell Crowe kill then in the arena?” Bradley asked.

“Gladiators?” Shaun said, rolling his eyes. “Commodus was an emperor, why would an emperor be fighting in the gladiator ring?”

“Because he took him on, Joaquin Phoenix…,” Bradley protested, but Shaun was having none of it. “No, he did not!”

“He did! That’s another film you haven’t seen!” Bradley swiped. “I have seen Gladiator, actually!” Shaun snapped back.

The Chase viewers react to clash

Plenty of viewers took to Twitter after Bradley and Shaun had finished bickering to react to the clash.

“It’s like watching your parents fight when Bradders and Shaun row innit,” one viewer cringed.

“These silly little spats between Brad and Shaun are [bleeping] annoying,” another ranted.

Others found the clash between the pair amusing.

“Their arguing and debate on the table is entertaining! The Dark Destroyer is some character today,” one viewer said.

“That Gladiator answer has left me [bleeping] my pants!!!” another laughed.