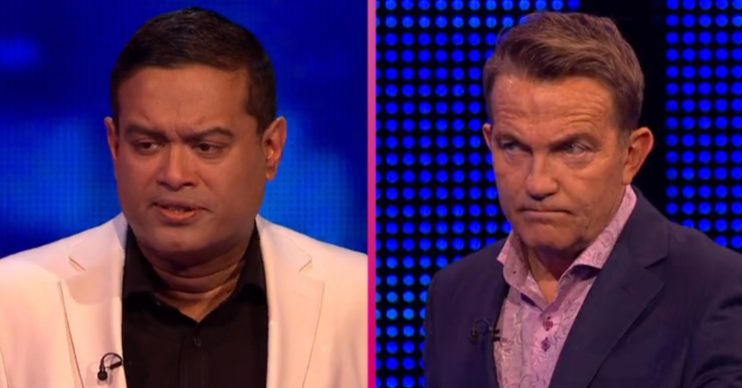 The Sinnerman got his revenge

The Chase viewers witnessed Paul Sinha get ‘revenge’ on a set of contestants last night to deny them the chance of taking home over £10k each.

Monday (September 14) evening’s episode of the ITV quiz show saw all four hopefuls make it to the final round.

How much were the contestants playing for against Paul Sinha on The Chase?

Not only had each of them successfully evaded The Sinnerman to make it back to their team; they also built up an impressive prize pot of £41,000.

Things were looking up at the end. With a full team, they had a four-step head start on Paul.

However, they managed to botch it – racking up a score of just 13 for the quizzer to beat.

Paul said before playing: “Well, it’s disappointing. The game’s not over, those were tough questions and I’m not going to take anything for granted. But when you look back on that, you’ll realise you didn’t get all the easy questions. And you got hardly any of the hard questions. That’s why you’re 13 and not 18.”

He caught them with an easy 40 seconds remaining.

Bradders told the team afterwards: “I thought you were an enchanting team, I really did.”

Paul said: “Do you know what? You were great players… I think you just ran out of puff.”

What did The Chase viewers think?

On Twitter, some viewers said they could be the “worst four ever” on the programme after their performance in the final chase.

Others saw the result as ‘vengeance’ for Paul, who had failed to stop them building a large cash pot – or getting back to their teammates – up to that point.

One viewer tweeted: “Had high expectations of this team but what a let down they were #TheChase.”

Another said: “[They] deserve that for being crap in the final #TheChase.”

Had high expectations of this team but what a let down they were.

A third wrote: “Possibly the worst ever four on #thechase.”

Possibly the worst ever 4 on #thechase

“Well well well…” said another, adding that the tables turned at the end.

“40 seconds left, WOW,” one shocked fan of the show tweeted. “They just [bleeped] in the final chase, it was abysmal!”

“#TheChase Vengeance is sweet,” another wrote.

Others commended Paul on the win and called the contestants “pants”, branding their performance a “train wreck”.