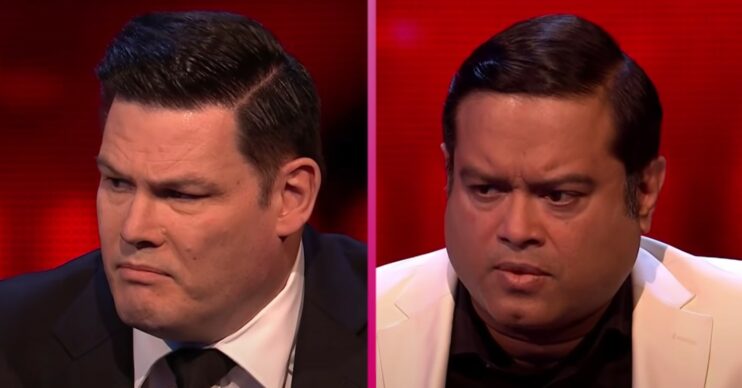 Tabloid claims stars can 'get fiery' over wardrobe matters

Mark Labbett and Paul Sinha have dismissed tabloid claims the stars of The Chase can be ‘stroppy’ off screen.

Both quiz stars fired back on Twitter after a report indicated tailors for their suits can struggle to deal with weight fluctuations.

Paul waved off the story as “nonsense” and “odd to read” while ‘The Beast’ suggested it was ‘lazy reporting’.

Mark Labbett and Paul Sinha: What was claimed?

The Sunday Mirror quoted an unnamed insider as saying Savile Row outfitters William Hunt are always on alert to knock up any changes to the suits the ITV pair wear for The Chase.

They reportedly said: “It’s not uncommon for brainiacs like The Beast to gain up to a stone in a short space of time, or lose a stone, which makes our jobs difficult.

“We’re constantly doing readjustments or sometimes having to even organise entire new outfits at the last minute.

“And the Chasers aren’t afraid to speak their minds, so sometimes they will throw a bit of a strop about it. Things can get fiery.”

Both stars made it clear today (Sunday March 27) they were unimpressed by the claims.

Paul thoroughly denied the story, saying: “I have no idea where any of my suits came from.

“I cheerfully wear anything I’m given, and if I think I’ve put on weight this is relayed well in advance.

I have literally never thrown a fashion-based strop in my life.

“The only time in my life I have been anywhere near Savile Row is for TV showdown.”

Paul, who suffers with Parkinson’s sufferer and lost two stone after a Type 2 diabetes diagnosis, added: “I have literally never thrown a fashion-based strop in my life.”

‘I don’t get my suits from Savile Row’

He tweeted: “Contrary to the tabloid reports I don’t get my suits from Savile Row. Currently getting them off the rack of a lovely place in Golders Green 🙂 #ShopLocal.”

Mark also joked a suit would be very unlikely to annoy him.

He continued: “As Mister Hangry I cannot deny stropping over food or a terrible performance, but over a suit?”

ED! has approached representatives for Mark and Paul for comment.