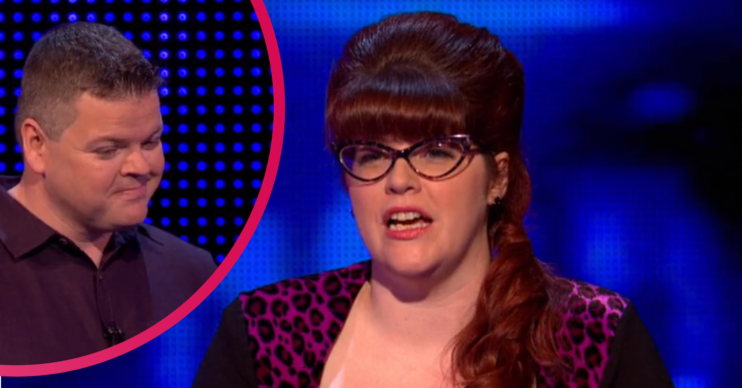 The Chase star Jenny Ryan beat a team by a hair’s breadth on the show last night and fans were gutted for them.

During Tuesday’s (August 4) repeat episode of the ITV quiz show, two of the four contestants made it to the final chase, playing for a pot of £7,000.

With their two-step head start they set up a score of 18 for The Vixen to beat.

What happened with Jenny Ryan in the final chase?

Unfortunately it wasn’t enough, although the result was incredibly close.

Jenny caught them with just one second remaining, and those watching at home couldn’t believe it.

Many viewers on Twitter expressed sympathy for the team, branding the final chase “harsh”. Some joked it was so close they needed to “lie down” after watching the closing round.

One tweeted: “A second remaining! Close! But no cigar.”

Another wrote: “#TheChase come on, you could have let them win. One second.”

#TheChase come on you could have let them win.1 second.

Someone else put, “#TheChase Harsh” and another agreed, “Yeah, too harsh”.

“Don’t know how they can smile on #TheChase when they lose,” said a fifth, adding: “I’d be fuming losing with a second to go.”

“Unlucky, one second #TheChase,” a sixth viewer said on Twitter.

“ONE SECOND LEFT!” exploded another in all caps. “Jenny’s right, I need a lie down after that!”

Another joked that such a close result “should be illegal”.

Don’t know how they can smile on #TheChase when they lose. I’d be fuming losing with a second to go😡

ONE SECOND LEFT! 🙀Jenny's right – I need a lie down after that! See you tomorrow, alright? #thechase pic.twitter.com/SrANXqSc2p

1 second?! That should be illegal.#TheChase

Host Bradley Walsh said after the team’s defeat: “Wow, wow! A second… a second! Six opportunities to push back, three executed. Caught with one second remaining. Bad luck. That was close!”

He turned to Jenny and she said: “Very nearly trouble at Chase Mill, that one. The lads did fantastically. It couldn’t have been closer. They ran me very close and got some brilliant answers on those push-backs. Oof! My heart rate, I need to go and have a lie down now.”