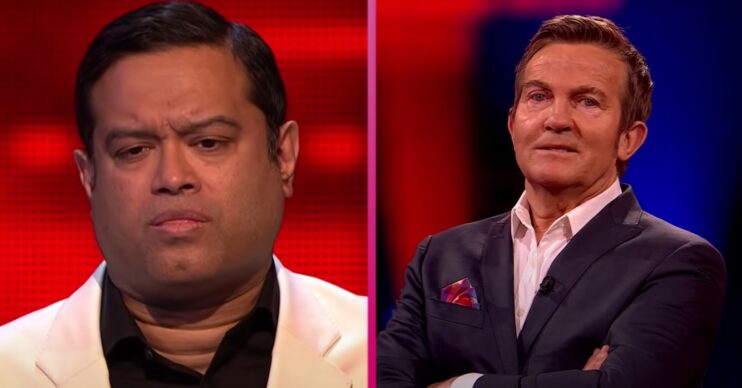 The Chase: ITV confirms when new episodes return after weeks of repeats

When is The Chase airing new episodes?

TV schedules reveal that The Chase will run new episodes from Tuesday, August 31, in its usual slot of 5pm!

Meanwhile, fans of spin-off Beat The Chasers are bubbling with anticipation after Chaser Paul Sinha gave an update about series 4.

The Sinnerman posted to Twitter earlier this month to reveal that filming has been completed for the ITV quiz show.

And Paul, 51, also delighted supporters after confirming he’ll be part of the latest spin-off run, having missed out previously.

What did Paul Sinha tweet about Beat The Chasers series 4?

Posting just before midnight, the telly fave told his 191,000 followers that production had wrapped.

Comedian Paul – who lives with Parkinson’s following his 2019 diagnosis – also noted how this series featured all of the show’s biggest characters pitting their wits together.

Read more: When does Beat The Chasers series 4 air? All six Chasers will appear for the first time

He previously explained on Twitter how he hadn’t “been well for the recordings and couldn’t join in this time around” for series three.

However, Paul highlighted he was back as he wrote on social media last night: “Beat The Chasers series 4 is in the can.”

‘All six Chasers together’

Paul also made it clear that viewers will be getting plenty of Chaser value for their money.

Super to hear you’re back.

He added in his tweet: “Thrills and spills, all six Chasers together, big wins, dramatic losses.

“In the words of Bradley, Perfick.”

How fans of Beat The Chasers reacted

Plenty of Paul’s Twitter followers were glad to know he was part of the series 4 set up. Others were excited about the show’s brainboxes being reunited.

“Super to hear you’re back. Looking forward to this,” one person tweeted.

Someone else continued: “Six? I’m looking forward to that. Truth is I fancy going on. I’d take you all on. I don’t fancy myself as a quiz God I’d just want the full army of Chasers in a game.”

And another person added: “I hope you had fun recording Beat The Chasers. I’m so excited to watch all the episodes when they are on TV.”

And among the dozens of those who responded to Paul’s tweet, many were quick to make it clear they had been in the studio audience.

“I was lucky enough to be in the audience for one of the recordings,” one social media user replied.

Another echoed that tweet by saying: “One of the audience yesterday and throughly enjoyed it all. Very funny watching the bits that won’t air too! Well done everyone!”

Leave us a comment on our Facebook page @EntertainmentDailyFix and let us know if you are looking forward to The Chase airing new episodes?