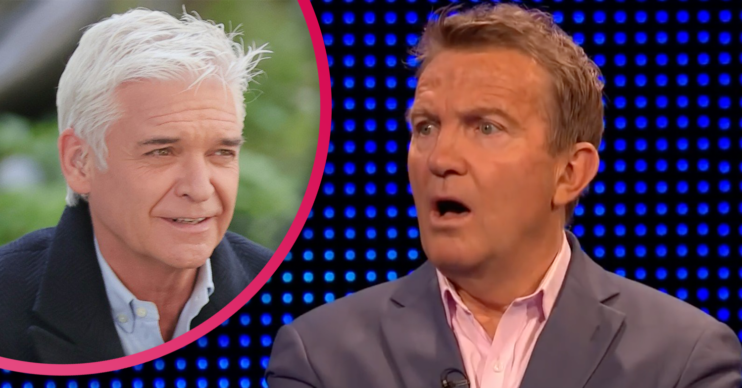 The Chase host Bradley Walsh was once caught up in a drugs scandal and it was all down to his pal Phillip Schofield.

The quiz show favourite and the This Morning star are firm friends, having previously holidayed together.

So, while we’re sure there were no hard feelings over the blunder, The Chase star Bradley might have got a bit of a shock had he been tuning into the ITV daytime show back in the spring of 2018.

What happened with Bradley Walsh and the drugs scandal?

He was accused of using performance enhancing drugs when he sped to victory in the Tour de France 2012 – a claim he strongly denies to this day.

However, while discussing the story, Phil hilariously confused the retired cyclist with The Chase host.

It was then that he made the epic gaffe.

“Will we know the facts? Will we be able to exonerate Sir Bradley Walsh?” he asked.

This Morning fans aren’t known for keeping their viewers to themselves, so naturally they took to Twitter to react to the blunder.

“Bradley Walsh is now a Sir according to Phil,” another added.

A third viewer joked: “I didn’t realise Bradley Walsh was a knight who cycles.”

Did Phil apologise to The Chase star?

Coming back from the break, he said: “Sorry, I think I mixed up Sir Bradley Wiggins and Bradley Walsh earlier.”

He then quipped that it was “payback” for Bradley Walsh gatecrashing Phil and Holly’s speech at the National Television Awards that year.