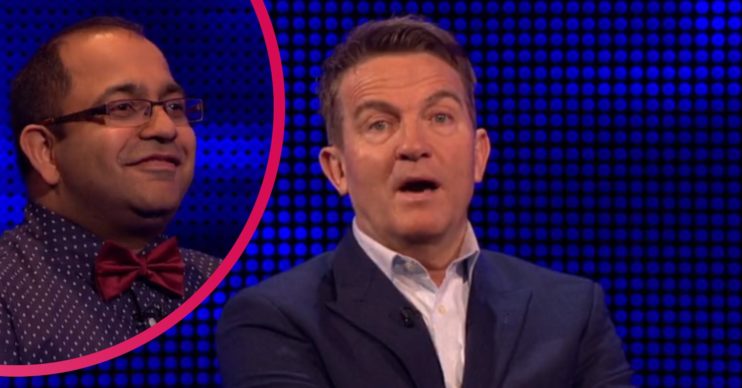 They couldn't believe Sandeep went for the -£4k

The Chase viewers were furious last night when an ‘undeserving’ contestant went home with winnings after taking a big hit with his low offer.

During Tuesday (July 28) evening’s repeat episode, psychologist Sandeep got a respectable £6k during his cash-builder round.

What happened with the low offer on The Chase?

But when he stepped up to face chaser Anne Hegerty, he shocked those watching at home by going for the Governess’ low offer of -£4k – dropping his own potential contribution to the team by £10k.

As expected, Sandeep made it back to his team and they went on to defeat Anne in the final chase, bagging £12k.

As there were four of them left, each member of the team went home with £3,000.

But ITV viewers struggled to get past the fact that they had each taken home £2,500 less than they could have as a result of Sandeep taking the low offer.

Fans of the show rushed to Twitter to say he “doesn’t deserve a penny” and should “hang his head” in shame.

One wrote: “Sandeep doesn’t deserve a penny of that #TheChase.”

Another on Twitter said: “#TheChase Sandeep has just become public enemy number one.”

A third tweeted: “Nothing brings the nation together like the seething fury of watching someone take the lower offer on #TheChase #Sandeep.”

A fifth wrote: “Sandeep is a shameless minus offer taker. He should split his prize money between the other three then write them IOUs for £1,500 each. #TheChase.”

“£4K though Sandeep £4 [bleeping] K!” said another, adding, “Not on!” alongside two angry face emojis.

“Sandeep, hang your head,” one said.

Sandeep is a shameless minus offer taker. He should split his prize money between the other three then write them IOUs for £1,500 each. #TheChase

Others came out to defend Sandeep, though.

“My man says Sandeep did the right thing, I’m so confused?” said one.

“Calling him a [bleep] is pathetic,” said another. “It’s just a [bleeping] game show. Get a grip and get a life #TheChase.”

My man says sandeep did the right thing I’m so confused ? #TheChase

Someone else pointed out that Sandeep technically did help out – and earn his share – in the final chase by contributing several steps of their 23 total.