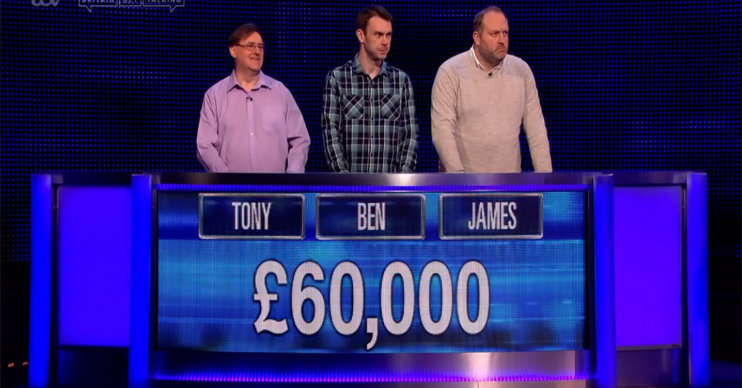 They went against Chaser Mark Labbett

Tony, Sophie, Ben and James went up against the Chaser Mark Labbett – aka The Beast – on Friday’s edition of the game show (April 3).

However, Sophie failed to get back for the Final Chase and Ben, Tony and James played for £60,000.

The team then played for £60,000 and bagged an incredible 22 steps ahead of the Chaser.

It was a close race, however, The Beast beat the team with just six seconds remaining.

He exclaimed: “Yes! What a tremendous team that was. You can see how happy I am. There’s nothing better than beating a good team.

“James, don’t beat yourself up because I had five seconds left and that’s easily one question for me.”

Viewers were gutted for the team and shared their thoughts on Twitter.

One person said: “Omg I cannot BELIEVE they lost 60 grand with 6 seconds to spare.”

Another wrote: “I’m gutted for the team.”

A third added: “I wish they could have won.”

Others were convinced The Beast had easier questions.

One said: “#TheChase could #MarkLabbett have had easier questions???? #Chaser #fix that was ridiculous.”

Another wrote: “Not even difficult questions for The chaser #fix #TheChase.”

Another ranted: “That wasn’t a fix at all? Bradley reading the questions like a rocket!”

#TheChase could #MarkLabbett have had easier questions.???? #Chaser #fix that was ridiculous 😩🤔 #ITV

Not even difficult questions for The chaser #fix #TheChase

That wasn't a fix at all? Bradley reading the questions like a rocket! #TheChase

Ent Daily has contacted reps for The Chase for comment.

Read more: The Chase fans claim contestant was ‘robbed’ by teammates as they win £13,000

Earlier this week, viewers thought a contestant was “robbed” by his teammates.

Mark answered most of the questions during the Final Chase and the team bagged 18 steps.

Chaser Anne Hegerty – aka the Governess – didn’t beat the team and they took home £13,000 between them.

Viewers have said they think Mark deserves to take the money as he answered the majority of questions.

However, one person pointed out: “Well done team (Mark for the final chase, Gill & Peter for the pushbacks).”

The Chase returns to ITV, Monday, April 6, at 5pm.