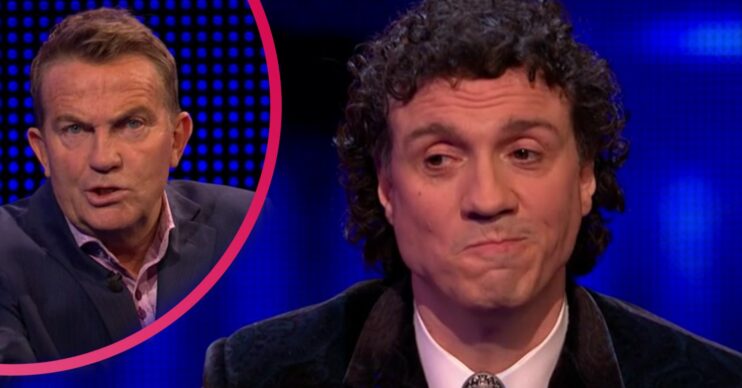 The Chase: Darragh Ennis hits back at viewers who accuse him of losing episode on purpose

Darragh would never, ever lose on purpose

The Chase star Darragh Ennis has hit back at viewers who accused him of losing an episode on purpose.

The 41-year-old Irish star – who goes by the name of The Menace on The Chase – reacted strongly to the claims.

What happened with Darragh Ennis on The Chase?

Paul, Lynsey and Sarah managed to set a fairly modest target of 16.

Read more: The Chase contestant hits back at criticism on Twitter following battle with Darragh Ennis

Darragh, normally so good in the final chase, proceeded to have a bit of a nightmare.

He offered the team a whopping eight pushbacks, which they fully took advantage of.

Viewers couldn’t believe Darragh’s performance, with some accusing him of losing on purpose.

For those of you accusing me of losing that game on purpose on #TheChase today a few things: 1. That would be fraud 2. You are committing libel 3. You are doing a disservice to a good team who smashed in the pushbacks 4. I will block people in future.

What did Darragh say?

In the face of the accusations, Darragh hit back strongly on his official Twitter feed.

He said: “For those of you accusing me of losing that game on purpose on #TheChase today a few things…

“1. That would be fraud 2. You are committing libel 3. You are doing a disservice to a good team who smashed in the pushback.

How did fans react to his rebuttle?

Soon enough, fans got in touch to offer him their support.

One wrote: “Hmmmm could only be said by people who don’t actually know you! Lose on purpose? Not a chance lol!”

Another said: “Are people not allowed bad days now? What a ridiculous accusation to make.”

A third commented: “Professional pride and integrity are real. Nobody loses on purpose. Give Darragh a break.”

Finally, a fourth said: “Watched this. He was unlucky. 50/50 questions he zigged when he should have zagged.

“That team was on point, and don’t forget they had a semi-pro quizzer in their ranks.”