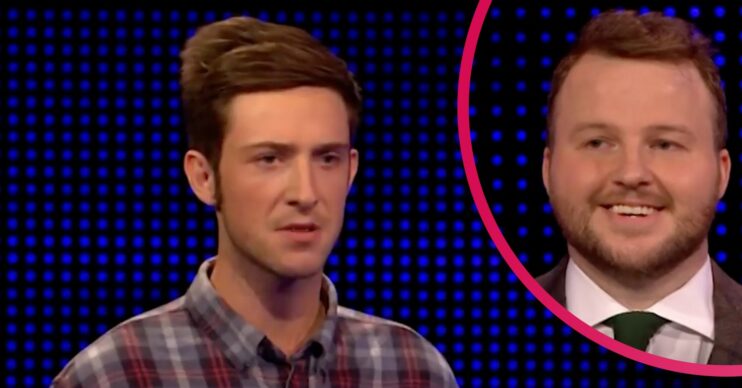 Matt wasn't happy at all

The Chase viewers were in stitches after spotting a contestant’s “furious” reaction during the final chase last night.

Matt and Geoff walked away empty-handed after last night’s show – and Matt clearly wasn’t happy with his fellow contestant.

Last night’s episode of The Chase saw yet another group of four go up against the Chaser.

Matt, Geoff, Christine, and Diane all took on Mark Labbett, aka The Beast, however, only Geoff and Matt managed to evade capture.

Matt and Geoff managed to answer 13 questions correctly in the Final Chase, giving them a bit of a headstart over the Beast.

However, the Beast caught them with 54 seconds remaining, meaning Matt and Geoff went home empty-handed.

Upon losing, Matt didn’t look happy, especially with his co-player Geoff according to viewers. Matt answered every question bar one during the final Chase.

Viewers picked up on his thunderous looks and took to Twitter to laugh about it.

“Matt looks like he’s [going to] chin someone,” one viewer tweeted.

“Matt looks [bleeping] furious,” another said. “Suppose I’d be furious too if Geoff was on my team,” they added.

“Even Matt looks like he wants to punch the Beast,” a third wrote.

What else happened on The Chase?

Matt also drew Bradley Walsh‘s attention during the show thanks to a surprising confession he made at the start of the programme.

During the cash builder round, Bradley asked Matt what his hobbies were.

Matt, who is tall and slim, then revealed that he is a competitive eater.

“I’m big on my food, and when I say that I don’t mean quality, I mean quantity,” Matt said.

“My first formal challenge was back in 2015 in Australia, which was a kilogram of steak, 500 grams of chips, 500 grams of vegetables and I had to do that in 30 minutes,” he revealed.

“I’m surprised you don’t weigh heavier!” Bradley said. “You can see that you’re tall, I can see that, but…”

Matt then revealed that he does a lot of exercise to stay in shape.