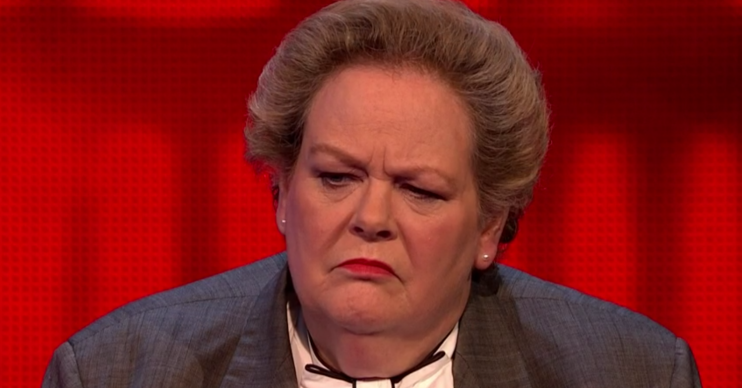 Turns out the bold player has been on the box before, too

A spirited contestant on The Chase quickly backed down from a clash with The Governess after apparently trying to rattle the formidable quizzing talents of Anne Hegerty this evening.

Andrew, a 57-year-old author from Manchester, came in for a deluge of criticism on social media from viewers after he eyeballed the Chaser on Wednesday’s episode of the ITV quiz.

And although his solo challenge was easily dismissed by former I’m A Celebrity start Anne, 61, in her role as the stern Governess when she squashed him in the Final Chase with a minute and 13 seconds to spare, it seems his efforts could live long in the memory of the game show’s fans.

Firstly, many of those watching at home believed they recognised him as an audience member from Channel 5’s Jeremy Vine show, with several people sharing screenshots which certainly seem to suggest he has appeared on TV before.

He also encouraged each of his fellow contestants – Sally, a 43-year-old retail assistant from Wiltshire, 34-year-old police call handler Scott from Sheffield and Vikki, a 28-year-old facilities manager from Essex – to take the lowest offer from The Governess following their Cash Builder rounds.

Each time they ignored Andrew’s suggestion – and all subsequently crashed out of their game when caught by Anne.

But following Vikki’s defeat, Andrew appeared to really get into the game as he ‘fronted up’ to The Governess after she aimed a spot of banter in his direction.

Noting how Andrew would face her on his own in the Final Chase if he managed to do what the others hadn’t been able to and actually make it through, The Governess referred to his previous advice about pursuing the lowest amount, joking: “I wish I could make a minus offer.”

However, instead of piping up with a comeback, Andrew stayed silent and held his gaze in her direction.

“Oh! It is a stare down now, is it?” she continued, with a slightly more forbidding tone.

And that tone seemed to snap Andrew out of it as he insisted, a little humbly: “I’m just being focused!”

But The Governess did not let up on him, poking fun at Andrew’s interest in travelling across the UK and also his hope to treat his mates to a pub meal with the prize money if he won.

Two put-downs in one. The Governess is brilliant and brutal. 😂 #TheChase pic.twitter.com/IULsd2owVA

He had earlier explained he wanted to take ten pals out for a Steak Night or a Fish and Chips Night at a Wetherspoons – or maybe twenty friends on a ‘2 for 1’ evening.

Recalling this, The Governess damned Andrew with faint praise: “It is rare we have someone on the show that makes Brad look sophisticated.”

“Anne at her best!” tweeted one person watching the quizzing action unfold.

“This guy has no chance now against Anne,” suggested another.

A third person added: “Anne is going to crush him for that stare.”

As dozens and dozens of viewers wondered why Andrew would pursue such a strategy – and hurled a great deal of abuse at him on social media for doing so – he joked with host Bradley Walsh: “I’d have taken a minus offer [if there was one] and owed you money!”

Can’t can’t this bloke has gone for £241. Has he never seen #thechase before??? pic.twitter.com/ibSGqt9DTx

However, despite his one step head start in the Final Chase, he only managed to answer eight questions correctly.

The Governess fumbled over one answer when her turn came, but Andrew was unable to execute the pushback and so he was finished off in rapid order.

“That’s the problem of being single player, [you] need a full house,” Bradley sympathised.

Allowing herself one last dig, The Governess declared: “A valiant effort. I may have been caught out, but I wasn’t.”

It's time to meet today's team! Who do you want them to face? #TheChase

The Chase returns to ITV tomorrow, Thursday, February 13, at 5pm.