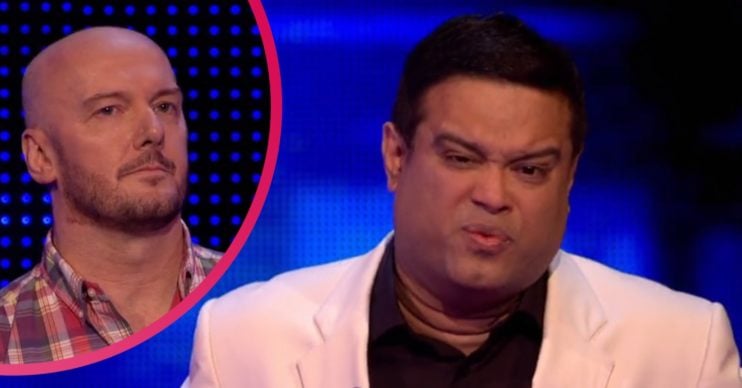 The casino manager put in an incredible performance

ITV viewers called a contestant on The Chase a “sore loser” when he appeared to be “fuming” after losing in a tense final against Paul Sinha.

The last contestant to step up to the plate was George, a casino manager from County Durham, who ended up bringing an impressive £8k back for his team, bumping the prize pot to £15k.

Of the four of them, Debs was the only one eliminated, so George joined his teammates Rebecca and Paul in the final chase against Paul Sinha.

They set up a strong score of 21 for the chaser to beat, largely thanks to George’s quizzing prowess. He delivered more than a dozen of their right answers.

He looked pleased with his performance, but unfortunately, The Sinnerman – British quizzing champion – caught them with 15 seconds remaining.

It was a blistering performance from the quizmaster, who went 18 questions straight before he got one wrong.

Host Bradley Walsh thanked the team for coming on. And while Rebecca and contestant Paul smiled, George remained straight faced – so much so, that viewers at home thought he appeared to be “fuming”.

The Sinnerman said when it was all over: “I don’t often say this when I win. You deserved to win! Really unlucky. But you have my absolute admiration. No offence to Rebecca or Paul, you were both very good players.

“But George, you’re one of the best players I’ve ever played against. Unlucky.”

Another said: “Blimey George, lighten up. It’s £5k and it’s a game #TheChase.”

A third tweeted: “The look on George’s face! He was fuming.”

Someone else said: “#TheChase George is fuming.”

A Twitter account that appeared to belong to George replied, alongside laughing emojis: “Don’t diss the resting [bleep] face.”

Blimey George lighten up , it’s 5k and it’s a game.#TheChase

Others heaped praise on George for putting in a “great” performance, while some said they thought his was one of the best final chases they had ever seen.

“@paulsinha was on fire then,” tweeted one viewer, adding: “Needed to be, they were a good team. George was great #TheChase.”

“That was an incredible last chase,” said another. “Best I’ve seen in ages.”

@paulsinha was on fire then, needed to be they was a good team george was great #TheChase

That was an incredible last chase, best I’ve seen in ages.