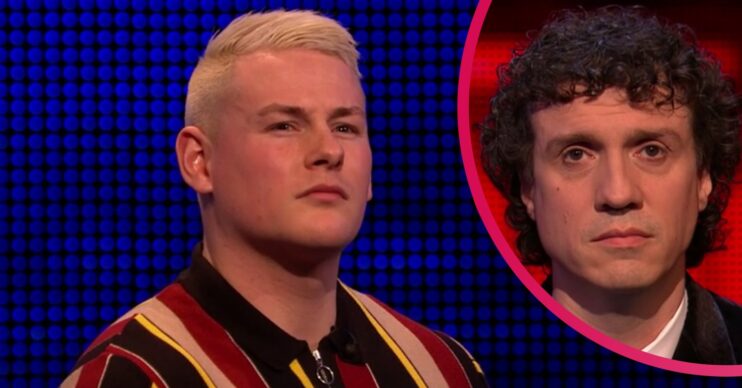 Matt from St Helens was accused of 'brain farting'

A contestant on The Chase squared up to critics on Twitter after being slammed for his performance against Darragh Ennis.

Matt, 27, was blasted by social media users for several reasons, including his hairstyle and pausing before answering questions.

But the sales executive from St Helens did not take the online abuse laying down, tweeting back at many moaners.

Darragh ‘The Menace’ Ennis was the Chaser on duty to match up with Matt and his teammates yesterday (October 4).

He also admitted he was yet to search for comments about The Chase on Twitter after a critical tweet sarcastically referring to him as ‘Einstein’ was sent his way. That tweet mocked him for wanting to spend any winnings on his tattoos.

However, Matt later engaged with tweets made about him – and slapped down the more abusive posters.

Matt was pulled up by many on social media for ‘brain farting’ after buzzing to answer.

He admitted, adding laughing emojis to his tweet: “Not cool at all I know.”

However, he also reacted to sweary tweets about the colour his hair had been dyed and taking a low offer by prodding those who wrote them.

Many tweeters had not referred to Matt by name, but their hashtags and comments made it clear they were referring to him.

Hits back at online abuse

Replying to one tweet which claimed “that lad was a [blank]ing idiot hindrance”, Matt defended himself: “Most questions right.”

And responding to another tweeter who suggested Bradley Walsh swerved the offer of going for a pint sometime, Matt replied: “Don’t think he’d go for a drink with you either.”

Matt also made use of GIFs to reply to others who branded him a “loser” and a “numpty” for taking a low offer.

He also dismissed one person who rhymed his name with an abusive term as “angry”.

Another who claimed Matt looked like a ‘fat Eminem’ was also told to look in a mirror themselves.

Comparisons were also made between Matt’s appearance and musclebound cartoon character Johnny Bravo.

One person did later apologise for swearing about Matt, telling him: “Please know it is all in jest.”

However, despite letting many OTT tweeters know their silliness had been seen, Matt seemed to have enjoyed his experience.

He teased at a rematch with Darragh and also posted a pic from when the show was filmed showing him and Darragh social distancing.

“It was a pleasure,” he tweeted at The Menace.