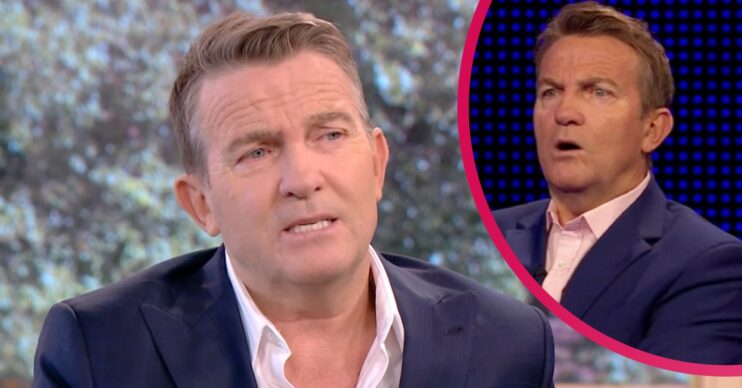 The Chase presenter Bradley Walsh has spent decades making a name for himself on television.

As well as fronting the much-loved ITV quiz show, the star has featured on Beat the Chasers, Breaking Dad, The Larkins and BBC One’s Take Off – and that’s just in the past year!

But while Bradley may appear busier than ever, he admitted to being selective when it comes to work.

In fact, Bradley has turned down plenty of work offers over his career.

This is due to him only being able to concentrate on one project at a time.

Speaking to the Belfast Telegraph in 2017, he explained: “I don’t think I can plate-spin, I’ve turned loads of things down because I just can’t get the time to do it. I can’t devote the time and it’s preparation.

I don’t think I can plate-spin.

“If I’m doing a job I’ll give it 100% and that job gets my absolute focus and everything else goes to the side. Then that job is finished, I’ll concentrate on the next job.”

In addition, Bradley, now 61, admitted that his age has also played a part.

He added: “I’m two-and-a-half years off being 60 but I feel 35. I run up stairs, I’d still play football if my knees could handle it. I’d still do all that stuff. It’s just the way it is. I’m enjoying this time of life, I think it’s fabulous.”

Despite his busy schedule, Bradley may soon have some free time on his hands.

It comes after his BBC One show with Holly Willoughby, Take Off, has reportedly been axed.

The prime-time travel quiz, filmed before the COVID pandemic, saw players from the studio audience try to win plane tickets for luxury holidays.

But, according to The Sun, the programme won’t be back for a second series.

A source told the tabloid: “Take Off was filmed before the pandemic when travel was much easier. Now, it’s more difficult with so many restrictions. It didn’t land with viewers who were grounded.

“However, Holly and Bradley loved working together and had amazing on-screen chemistry.”