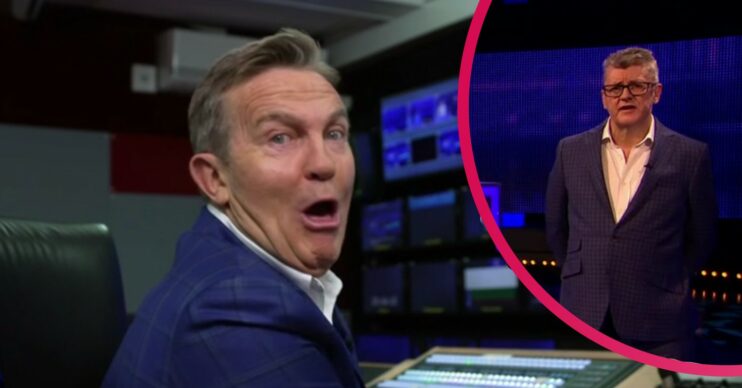 The Chase: Bradley Walsh takes it in good humour after being replaced on episode

Bradley Walsh was replaced by an old friend on an episode of The Chase last night.

The 61-year-old presenter was briefly replaced by Joe Pasquale in a special bloopers episode of the show yesterday (Sunday, January 2)!

Bradley was less than impressed to see he’d been replaced on The Chase at the beginning of yesterday’s bloopers show. And he was even less impressed when he heard just what his replacement had to say about him!

Viewers tuning into The Chase bloopers episode will have been surprised to see comedian Joe Pasquale hosting the show.

Read more: Bradley Walsh spent his first Christmas as a grandad and he declares himself ‘brilliant’

The comedian didn’t stop there with his swipes at Bradley though!

“Once again I’ll be asking questions I can barely read, let alone understand,” he continued.

The camera then cut to Bradley sitting in the Director’s chair, shouting: “Cut! Security!”

Joe was then seen being chased off the set by security as the skit came to an end.

Despite Bradley’s ‘replacement’ on the show just being a joke, plenty of fans headed to Twitter to spread some love about the long-running host.

“I don’t care you could be in the worst mood but Bradley Walsh on The Chase bloopers will make you laugh so much,” one fan said.

“The day Bradley Walsh retires from The Chase, will be a sad day,” a third viewer said.

“I love Bradley Walsh! He really makes me laugh! It must be so much fun appearing in The Chase,” another tweeted.

The Chase bloopers episode was yet another appearance made by Bradley Walsh on TV over the festive period.

It seems as though Bradley was practically everywhere over Christmas. Not only was the star hosting Christmas editions of The Chase, but he also starred in The Larkins, fronted Blankety Blank, and took part in another series of Breaking Dad too!

The 61-year-old actor, singer, and presenter reportedly picked up a £500,000 Christmas bonus for all his TV work in December 2021.

Read more: Bradley Walsh chokes up revealing Des O’Connor was ‘like a dad to him’ in emotional interview

Christmas 2021 was a significant one for Bradley too, as it was his first as a grandfather! Bradley’s daughter, Hayley, gave birth to a little boy this year, and Bradley revealed he’s going to spoil him!

“I’m going to be a brilliant grandfather because I’ve got this trick,” he said. “When the baby grows into a toddler, make sure you spend plenty of time with them. Feeding them ice cream and Coca-Cola.”

“And then give them back at just the right time and say to your children: ‘There you are, that’s what you were like,'” he joked.